Posted in DVD Reviews by George Theofanopoulos on 14 June 2011 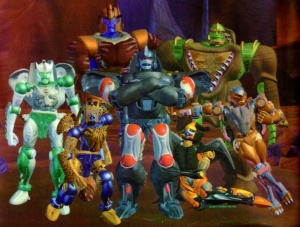 When the descendants of the treacherous Decepticons, now known as Predacons, land on a mysterious planet in search of the powerful fuel Energon, it’s up to Optimus Primal and the heroic Maximals to stop them before they conquer the universe! In 1996 Transformers fans were introduced to this stunning saga created by Hasbro and the studio behind the groundbreaking computer-generated animated series ReBoot. Beast Wars ran for three amazing seasons, won an Emmy Award for Outstanding Individual Achievement in Animation and introduced a new generation of fans to the astonishing world of The Transformers! Now you can see the first 26 incredible episodes of this breathtaking animated epic. 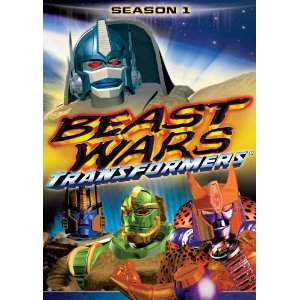 Beast Wars debuted in 1996 as a new take on the classic Transformers show from the 80s. The re-vamped toyline became a hit, and the show was even better. Audiences soon learned that not only did BW tie in with the original Transformers, in many ways, it was a continuation of it.

These episodes are a great intro, and a must in order to get the entire epic story of Beast Wars. The show really hits its stride towards the end of the first season, and I can still remember how excited I was through pretty much all of the second season. Do not make the mistake of writing this show off as standard kiddie fare, it was one of the best written “cartoons” I’ve ever watched, a true science fiction saga. Credit for this goes to the series’ two excellent story editors: Bob Forward and Larry DiTillio. They breathed a life into these transforming robots the like of which Transformer fans had never seen (let’s face it, the original TF characters were somewhat one and two dimensional). So, there you have it: characterization, plot, script, visuals, all of these and more are reasons not to miss a single volume of this, the best Transformers has to offer, finally on DVD.

And that’s all 26 episodes, the storytelling may start out slow but improves greatly as the season moves along and there are plenty of later references to the original G1 series (perhaps most noteworthy is an episode where Starscream returns and possesses the body of Waspinator). The Characters are for the most part great with a wide array of personalities and just as many interesting bots on the heroes side as on the villains. Megatron is a wonderfully twisted villain, Optimus Primal is the quintessential boyscout (other than a few key moments) and a nice element of constant tension is added by having Dinobot defect from the Predacons early and joining the Maximals.

The marketing device of having status pods crash every few episodes to introduce new marketable characters is actually fairly clever and makes for many fun episodes where the teams race to collect a new member for their side. It all culminates in a season finale cliffhanger that I couldn’t believe as a kid and that leads to the excellent second season where the G1 series is really revealed as relevant to the series in a much deeper and more immediate way.
Movie Quality: 9.5/10