Posted in DVD Reviews by George Theofanopoulos on 22 September 2009 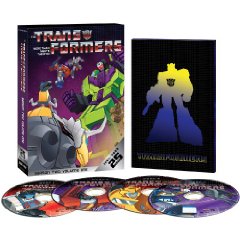 The War Against the Decepticons Rages On in The First 28 Episodes of Season Two!

The adventures of Optimus Prime and his valiant Autobots continue as they protect their new home planet, Earth, and its people against power-hungry Megatron and his Decepticons. With the help of their human friends Spike, Sparkplug, Chip and Carlee, the Autobots search for the fuel necessary to send them home and reenergize their planet of Cybertron. But if the Decepticons seize their energy source first, the entire universe may suffer the consequences under the reign of the malevolent Megatron. This 4-DVD set contains the first 28 episodes from the second season of The Transformers, including fan-favorites such as the two-part Dinobot Island, Enter The Nightbird, The Master Builders and The God Gambit.

The second season of Transformers was when everyone was going nuts over TFs. The creators, at this time, were either given much more leeway with the stories or had figured out to work within the system because, frankly, this season is spectacular. Though I saw many of these episodes only once, this is the season that my most vivid Transformers memories come from.

The animation for the most part is a big improvement over the first season and contain less coloring mistakes. Tons of new characters show up, (albeit most without explanation at all), such as the Triple Changers Blitzwing and Astrotrain, the show off Autobots Powerglide and Tracks, new Decepticon jets Ramjet, Thrust, and Dirge, and Autobot powerhouse Omega Supreme.

The characters are still very well written, with the show taking full advantage of the totally different personality traits and abilities of each character. The original series did this much better than any of the modern day Transformers shows do. The voice acting is still awesome as well, with a literal whos who of cartoon voice acting at the time. Scatman Crothers returns as Jazz, Casey Kasem returns as Cliffjumper. Chris Latta returns as Starscream. And, of course, you get the awesome Peter Cullen as Optimus Prime and Ironhide.
Movie Quality: 10/10

There are no special features which is a shame.

Overall this is defintely a must own. Finally time to upgrade from the 2002 Rhino set. I can’t wait for the 2nd season Part 2, and hopefully top it off with Season 3. It’s great watching every episode and bringing back such memories from years ago.
Overall Rating: 9/10