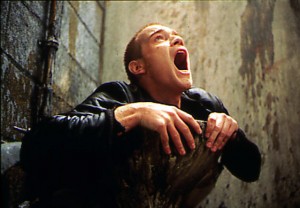 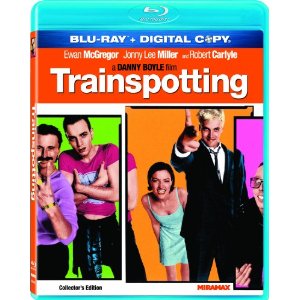 Danny Boyle’s Trainspotting is a film that has left me perplexed ever since the first time I viewed it as a teenager nearly a decade ago. I remember, as I finished the film, thoroughly hating it. There was something about its subject matter and characters that I immediately found off putting. It wasn’t until my third or fourth viewing of the picture that I really understood what Boyle was going for.

It’s supposed to be off putting and the characters are supposed to be unlikable. The film shows just how much of an impact heroin can have on a young individual’s life. It destroys it to the point where heroin because the only that the really matters. For these young drug addicts, the only thing that gets them through the day is the anticipation of the next hit. By using over-the-top visuals (the sequence with the dead infant in the crib is one that I won’t be able to shake for sometime) and a rapid MTV music video style editing, Boyle makes the film visually fascinating while showing the truth behind the life of the average drug addict.

If I have a problem with the film it’s that it really doesn’t go far enough. Less quick cutting and hyper stylized editing and more human characters would have made the film deeper and more palatable. But, maybe that wasn’t what Boyle was going for. With his use of editing, he shows just how much can be lost when one is stuck in the sad world of drug addiction. That, in and of itself, makes the film something special. The film is gritty and dark, both qualities that are rarely seen in Hollywood movies today. I still think the ending doesn’t work as well as it should as it feels a bit too upbeat but that’s a minor quibble of an otherwise fine film.
Movie Quality: 9.5/10

The print is presented in 1080p/AVC MPEG-4 with a 1:85:1 aspect ratio. Color is vibrant and bold in this transfer. A very good example of that is the color red, when blood splats on the floors, walls, and in the air. The film is so colorful that it is very good in details. There are also moments though where the transfer does lack in a few areas. Lighting was a problem in a few scenes where there appeared to be too much light in the background.
Print Quality: 9/10

The audio is presented in a DTS-HD MA l0ssless 5.1 mix. The soundfield is immersive at all times no matter if it is the special effects or dialogue. I was literally amazed with the amount of dynamic panning from each speaker in the rears. Bass was punchy. Dialogue is also well placed in the center channel sounding crisp and clear. The best part of this all around aggressive soundtrack is that it is well balanced between the dialogue and sound effects.
Print Quality: 9.5/10

This dark comedy ranks as one of the great films of the ’90s. The acting is good, the story is highly engaging, and the take on life it offers is definitely a reflection of the modern world, albeit a dark one.
Overall Rating: 8/10