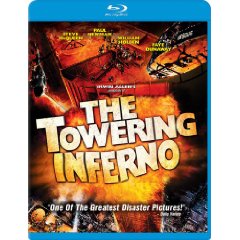 Disaster movies used to work because there was little certainty as to who would survive. Not so in this film, really an amalgam of two original stories, about a group of well-to-do celebrants at the top floor of a skyscraper. Cheapo electrical wiring and bad construction management cause an enormous blaze at the lower floors, steadily rising to consume the revelers. Newman’s an architect, McQueen a firefighter, and Fred Astaire a kind old gentleman, for which he was Oscar-nominated. O.J. Simpson plays a security guard who rescues a cat. Now that’s a disaster.

It has always been easy to dismiss this film, just as most critics dismiss many of the popular disaster films of this era. Steve McQueen’s presence alone is worth the price of admission, and this role would turn out to be one of his last in a major film. He steals just about every scene he’s in, simply because of his extraordinary screen presence. A few wrinkles crease his weathered face, he’s kind of chubby, but even with middle age slowly approaching, McQueen’s spark is undeniable. “The Towering Inerno” is a great example as to why McQueen was one of our greatest movie stars.

Through it all, “The Towering Inferno” does have an important message, eventually becoming a tribute to the heroism of our nation’s firefighters. I also love one of Newman’s final lines in the film, in which he says they should just leave the tower as is – “I think they should just leave it, kind of a monument to all the bullshit in the world.” It’s also interesting to see two legends such as McQueen and Newman working together on screen. In fact, I can’t really recall a single film in history in which two acting legends the status of McQueen/Newman starred in the same film together such as this.
Movie Quality: 8.5/10

The print is presented in 1080p/AVC MPEG-4 with a 2.35:1 aspect ratio. I had never seen this film until it hit Blu-ray, but I have read that this is a huge improvement over the previous released special edition DVD. Colors are strong throughout the entire presentation with colors like oranges and reds taking center stage. The strong color management really helps bring this film alive and also does make the film feel like it is from the 70’s which is when the film made its debut. Black levels are some where in the middle where in some scenes are strong and others they hit some low levels. The print is clean with no major issues. I found the details to stand out very well considering the age of the film.
Video Quality: 9/10

The audio is presented in DTS-HD MA Lossless 5.1 mix. Considering that the film is 30+ years old, the sound design is not going to fully take advantage of the high res audio. The entire sound design has that whole 70’s atmosphere to it for the era. Dialogue was clean and crisp through the center channel.
Audio Quality: 7/10

While the special effects do not hold up as well here in 2009, the film was still rather enjoyable. Fans of the film should pick this up considering the amount of special features available. Also add a splendid picture and this is well worth replacing our old DVD.
Overall Rating: 8.5/10