Posted in DVD Reviews by George Theofanopoulos on 27 January 2011 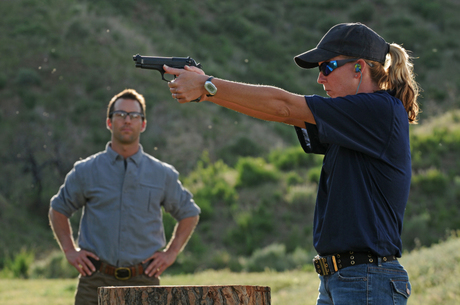 Whether it’s William Tell using a crossbow to shoot an apple off his son’s head, or Annie Oakley using a hand mirror to make a shot with a rifle slung over her shoulder, history is filled with legendary tales of amazing marksmanship. Now, HISTORY is tapping into these inspiring feats of sharp-shooting for its first-ever competition series, Top Shot, premiering Sunday, June 6 at 10/9c on HISTORY. Sixteen of the nation’s most skilled marksmen have been carefully selected to compete for the title. Some have professional shooting experience, some are amateurs–and all will showcase breathtaking timing, speed and accuracy in their quest to win the $100,000 prize package and the title of “Top Shot.” The winner will ultimately have to be skilled in everything from muzzle-loading muskets and modern pistols to slingshots and throwing knives. 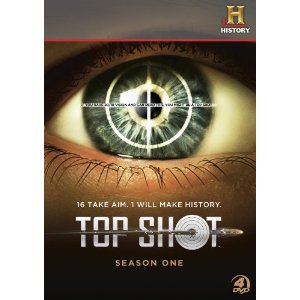 Like every other reality show these days, it uses “Survivor” as its template. Heck, even former “Survivor” runner-up/current good ol’ boy Colby Donaldson serves as host, presiding over all marksmanship matters. The premise rounds up 16 people already well-skilled in shooting — a cop, a Marine, a student, etc. — and goes through several challenges in order to eliminate them — but only figuratively — before crowning the ultimate winner. (Instead of granting them a cool “Survivor” million, however, “Top Shot”‘s budget can muster only one-tenth of that.)

While I’m not the target market for this series, several of its elements amused me. From an obstacle course that utilizes weapons from various wars to a slingshot challenge and a Wild West shootout, the whole affair strikes me as oddball. However, its contestants take things very, very seriously. I’m just not sure how, since the elimination ceremony — in which each player takes aim at a name-embossed circle to cast a vote of “see ya” — is kind of a hoot.

You wouldn’t think that the History Channel would stage a reality show. For those describing this as “Survivor with guns”, you’re not too far off. But there’s so much extra historical perspective here that it actually makes perfect sense. This is a reality game show that actually has some redeeming social value. There’s no backbiting here–not much, anyway, because so much of the game depends on skill that the teams are generally working together, and thus “alliances” are deeply muted here–and watching these people work together is downright inspirational.

Not one for reality television myself, I found Top Shot compelling enough to watch in 3 or 4 episode stints. The drama remains taut throughout – even with the teams so hideously slanted in one direction. Not surprisingly, it’s the most levelheaded contestants who make it to the final three, with the most immature folks getting knocked out courtesy of politics and freezing under pressure.
Overall Rating: 8/10