Posted in DVD Reviews by George Theofanopoulos on 26 July 2011 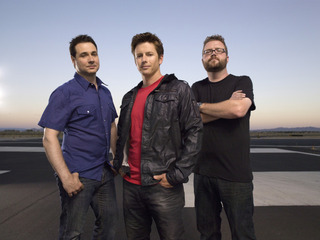 Join comedian Adam Ferrera, champion rally and drift racer Tanner Foust and racing analyst Rutledge Wood as they unleash Top Gear and explore the history of America, one lap at a time! Filled with wit and humor, Top Gear brings even more ambitious stunts, extreme challenges, humor and mischief in a series chock-full of high adrenaline action entertainment, car reviews and eccentric adventures. Top Gear challenges include travelling a moonshine run along a classic Prohibition route in the Deep South, teaching a blind man to drift a Nissan 370Z, racing a HALO jumper in a Ford Velociraptor across the Arizona desert, discovering America’s toughest truck on an epic journey through the Alaskan wilderness, and evading a Cobra helicopter gunship in a Dodge Viper… through the middle of town. The Stig also appears, setting definitive Power Laps for performance cars featured on the show, and there’s a host of celebrities taking the wheel in “Big Star in a Small Car” including astronaut Buzz Aldrin, Lost actor Dominic Monahan, Modern Family’s Ty Burrel, musician Kid Rock, Avatar star Michelle Rodriguez and skateboard legend and game designer Tony Hawk. 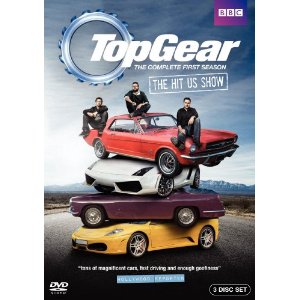 Top Gear UK is one of my favorite shows on TV. I was very excited when the US version launched on the History Channel. Just like the Australian version, its not as good as the UK version. You really just can’t replace James, Jeremy and Richard. They are some of funniest people on TV. However Adam, Tanner and Rutledge are still solid hosts. Tanner of course being a professional Rally Car driver and stunt car driver could have been The American Stig and has experience on auto shows as he appeared in a few shows on The Speed Channel.

Rutledge is very funny as he is on Speed Channel’s NASCAR coverage. Adam completes the trio and just like his co-hosts is funny. But the US version’s biggest flaws are the lack of originality and the lack of humor as seen in the UK version. As for the lack of originality the 5th episode of this series resembles quite obviously the British Leyland Challenge. And of course this US version has to worry about offending certain people and is perhaps more “politically correct” than the UK version. Obviously the humor suffers as a result of that. Still I have found it to be one of my favorite TV series as it focuses on American cars and is for Americans. I’ll still watch the UK version but I have found a 2nd favorite TV series.
Movie Quality: 9/10

For the majority of hardcore Top Gear fans this show was doomed from the day it was announced. It could never be as good as their beloved UK Top Gear.
Overall Rating: 7/10