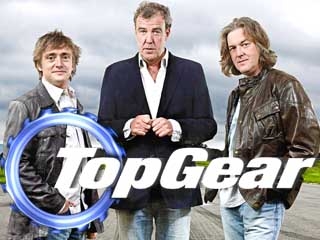 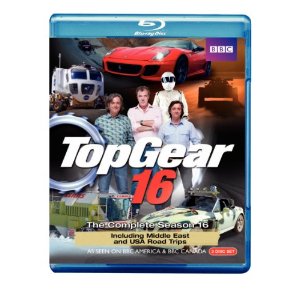 Top Gear is my favorite show on TV by a mile. The 16th season might have been the best yet. The cover of this set says it includes the Middle East and USA specials from December 2010 which is a huge relief. Two of my all time favorite episodes right there and very happy to hear that both will be in this DVD set. Watching James, Richard and Jeremy drive up the East Coast through NASCAR tracks, Washington D.C. and eventually up to NYC was entertaining to say the least. Much better in my opinion than the 2007 USA Special which had several scenes that were a bit much.

The Middle East Special features the trio being left in Iraq in covertibles wearing bullet-proof vests because, well, it is Iraq. They then reenact the journey of the 3 Wise men which ends with them discovering a Baby Stig to replace Ben Collins, the previous Stig, who had been fired following the 15th Series. Those 2 episodes alone are enough to make me buy this set but there’s so much more. James driving NASA’s latest space exploration vehicle, a road-trip to Albania to find the perfect car for the mafia, a hilarious attempt to make a combine harvester into a Snow Plough, Richard racing a VW Bug from 1 mile in the air with a Porsche 911, Jeremy’s fantastic review of the fabulous Skoda Yeti, Clarkson’s race against God(actually the sun) and a hilarious episode featuring the UK Top Gear guys in a series of challenges against the Austrailian Top Gear hosts.

In addition to all of this are reviews of the Ferrari F40, Porsche 959, Ferrari 599 GTO, Ariel Atom 500, Jaguar XJ, Pagani Zonda R, BMW M3 Competition Pack and the Audi RS5 just to name a few. The celebrity interviews in this series are quite good featuring a hilarious Jonathan Ross in episode 3, the 4th episode with Simon Pegg and Nick Frost and in the Season finale with John Prescott. If the cover isn’t lying, this set will feature the 6 episodes from Series 16 plus the 2 specials from the end of 2010. In all 8 fantastic episodes of Top Gear. Definitely a must buy for any Top Gear fan.
Movie Quality: 9/10

‘Top Gear: The Complete Season 16’ is is an excellent show and continues to be entertaining with each passing season. If you are a fan of the show I highly recommend Season 16 on Blu-ray.
Overall Rating: 7/10