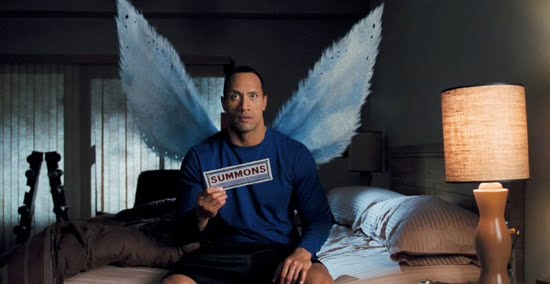 Dreams and “what ifs” have no place in the life of hockey player Derek Thompson (Dwayne Johnson). As a major league player who’s been moved down to the minor leagues following an injury, Derek thrives on negative attention, is ruthlessly pragmatic, and doesn’t think twice about crushing the hopes and dreams of even his youngest fans. His poor attitude spills over into his personal life when he almost convinces his girlfriend’s young daughter Tess (Destiny Whitlock) that the tooth fairy doesn’t exist. As if the potential end to his relationship with girlfriend Carly (Ashley Judd) wasn’t bad enough, Derek’s actions inexplicably result in a nighttime summons from the “Department of Dissemination of Disbelief.” Transformed into a tutu-wearing fairy with wings and whisked away to a fairy world, Derek assumes that his fanciful journey–and his sentencing by the head fairy (Julie Andrews) to a two-week stint as a tooth fairy–is just a bad dream. When his pager starts buzzing and wings sprout from his back at inopportune times, he realizes that his sentence is for real, yet he continues to deny the possibility that dreams and imagination have value. Derek’s disbelief makes him an extremely inept fairy, but with the help of fellow fairy Tracy (Stephen Merchant) and some bonding time spent with Tess and her brother Randy (Chase Ellison), he begins to glimpse the importance of dreams and imagination and even manages to rediscover some of his own dreams in the process. Derek is definitely one crazy fairy, but Dwayne Johnson’s skilled performance drives home the message that it’s OK to dream, believe, and imagine. (Ages 7 and older). 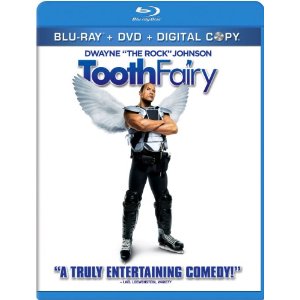 The movie stars Dwayne Johnson, finally free of the title “The Rock”. Also, as this movie proves, free of the ability to pick good screenplays. He plays Derek Johnson, a minor league, former NHL, hockey player in Michigan. He’s known as the Tooth Fairy because he frequently knocks out people’s teeth in his games, much to the amusement of the crowd (side note: the NHL needs to crack down hard on the violence at hockey games. I like hockey, but I like the game, not the fights. They don’t put up with this crap in the European leagues).

It’s also worth noting that we only see this tooth-removal process once, which is for the best. I noticed four things during the scene where we see it. Those were a: the tooth looked like it had been carefully extracted, rather than a broken, bloody thing, b: it was a molar, c: the screenplay refers to it as an incisor, and d: when we see the mouth of the person who lost it, it was clearly a canine. Apparently the director paid close attention to Michael Bay’s Second Rule of Filmmaking; Continuity is for losers.

He’s dating a lovely, one-dimensional woman played by Ashley Judd. She has a cute six-year-old daughter and a sulky thirteen-year-old son who doesn’t like Derek. No prizes for guessing if they bond and become good friends by the end of the movie. Derek makes the mistake of almost spilling the beans about the “real” Tooth Fairy to the girl by saying the Tooth Fairy doesn’t exist. Later that night, he gets a summons to appear for duty as a Tooth Fairy, which gives us the chance to see Dwayne Johnson in a tutu. I have a feeling this was a major part of the pitch to the studio.

In Fairly Land, he meets the head fairy (Julie Andrews), a fairy version of Bond’s Q (Billy Crystal), and his trainer played by Stephen Merchant, best known for playing Darren Lamb, the worst agent in the world, in Extras. Throughout the movie I kept picturing him trying to get Andy Millman to be in the movie. Anyhow, Derek goes through fairy training and then gets sent out on a series of tooth-recovery missions, each less entertaining than the previous.

Oh, there’s a couple moments where I laughed (Billy Crystal bringing Julie Andrews a tray of snacks and saying, “Here’s a few of your favorite things”), and some where I smiled faintly (Dwayne Johnson going mano a mano with Stephen Merchant), and Ryan Sheckler, who plays an up-and-coming hockey player was attractive enough that I’d like to see him both those ways, but for the most part I was grumbling and checking my watch.

The movie plays like a checklist of family and sports movie cliches. Does the would-be stepson bond with Derek? Is there a musical training montage? Does our hero learn life lessons about the value of thinking like a child? Will Derek be able to make a goal during the big game?

Dwayne Johnson was once positioned to be the next Schwarzenegger, and to an extent he’s living up to that. The problem is that instead of doing great action movies like Predator and the Terminator films, he’s skipped ahead to the Junior and Kindergarten Cop phase of his career.
Movie Content: 6.5/10

The print is presented in 1080p/MPEG-4 with a 1.85:1 aspect ratio. I was rather disappointed by the video quality as it wasn’t consistent throughout. Black levels are strong in several scenes, until one scene in particular that comes off looking very bad. The dreaded edge enhancement rears its head in this print. Color is vibrant and bold in this transfer. There are also moments though where the transfer does lack in a few areas. Lighting was a problem in a few scenes where there appeared to be too much light in the background.
Video Quality: 7/10

The audio is presented in DTS-HD MA lossless 5.1 mix. The soundfield is immersive at all times no matter if it is the special effects or dialogue. I was quite impressed with the depth of the dialogue coming through the center channel. Dialogue was clean and clear with no apparent issues. This film has some decent usage of the rears. The chase scenes sounded very good.
Audio Quality: 9/10

There is good material to be had in a story involving the Tooth Fairy. Terry Prachett managed it quite nicely in the wonderful novel Hogfather and it’s companion, the less-than-wonderful movie, Hogfather. On Blu-ray this film provides subpar video quality and a nice audio mix which I didn’t expect.
Overall Rating: 8/10