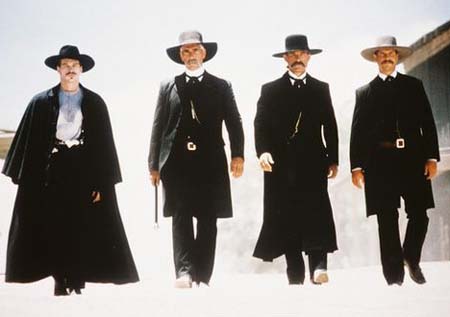 This Western has become a modest cult favorite since its release in 1993, when the film was met with mixed reviews but the performances of Kurt Russell (as Wyatt Earp) and especially Val Kilmer, for his memorably eccentric performance as the dying gunslinger Doc Holliday, garnered high praise. The movie opens with Wyatt Earp trying to put his violent past behind him, living happily in Tombstone with his brothers and the woman (Dana Delany) who puts his soul at ease. But a murderous gang called the Cowboys has burst on the scene, and Earp can’t keep his gun belt off any longer. The plot sounds routine, and in many ways it is, but Western buffs won’t mind a bit thanks to a fine cast and some well-handled action on the part of Rambo director George P. Cosmatos, who has yet to make a better film than this. 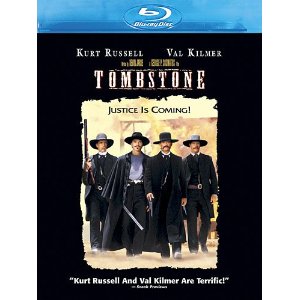 This is one of the most entertaining westerns ever made and as such, ranks right up there with “Shane,” “Open Range,” “Ride the Man Down” and Eastwood’s “The Unforgiven.” It is a story of changing times that haven’t quite changed enough. Kurt Russell gives his best performance as Wyatt Earp, coming to Tombstone with his brothers to settle down and put his lawman days behind him. Tombstone is a wild town still and a group known as The Cowboys and a young gunslinger named Johnny Ringo begin to make this impossible.

Dana Delany is radiant as the actress Wyatt falls for even though he is married. His wife has become a drug addict and his marriage is not the stuff dreams are made of, but Dana Delaney is. The film takes its time as Wyatt and his brothers are slowly drawn towards the history we have come to know, and the aftermath we may not.
This is a multilayered story more faithful to the truth than most versions. What makes this film superior to other westerns is the depth of the story and the realistic performances of the cast. The finest of the aforementioned is Val Kilmer’s extraordinary turn as Doc Holliday.

This film more realistically portrays the relationship of Holliday and Wyatt than any other film. Kilmer’s Holliday is dangerous and intelligent, and above all, loyal to perhaps his only real friend in life, Wyatt Earp. Kilmer so became the real Doc Holliday that it was said he remained in character on the set at all times, even when the camera was not rolling. His performance is something that will always be remembered by anyone who watches this film.

Wyatt is a real man in this film with raw courage but no self delusions. He is no gunman and realizes he can not beat the quick and dangerous Johnny Ringo in a gun battle. Doc Holliday, in spite of his illness, has Wyatt’s back and arrives there first. What follows is one of the most tense and accurately portrayed gunfights in film history. Doc Holliday and Wyatt Earp remained friends until Holliday finally was overtaken by the tuberculosis which had plagued him for years. As in real life, Wyatt Earp actually does find happiness and settles down with Dana Delaney after his wife dies in this film. The real Wyatt became quite wealthy in the latter part of his life.

The rich tapestry of events that formed the legend of the dangerous Doc Holliday and Marshal Wyatt Earp are given the best and most accurate screen treatment ever filmed. This is a must see western. You will never forget it and you will never see a better and more colorful true to life performance than Val Kilmer’s turn as Doc Holliday.
Movie Content: 9.5/10

The print is presented in 1080p/MPEG-4 with a 2.35:1 aspect ratio. For a film before the digital age and is 17 years old, I was surprised by the presentation of “Tombstone” on Blu-ray. I was surprised in a good way as I expected a very dull looking image, but colors are pretty good throughout.  I found fleshtones to run a tad bit on the hot side yet they did not look terrible at all. Black levels are strong. The film maintains are darker look and feel throughout with excellent lighting to where you never feel like it is too dark. Overall, the image is better than the DVD version, yet this could have received a full restoration.
Video Quality: 8.5/10

The audio is presented in DTS-HD MA lossless 5.1 mix. This is not an audio mix that I thought would take advantage of the high res audio. I was wrong, this is a bombastic and highly engaging audio mix from start to finish. Gunshots have a thundering blow into the soundfield adding a nice punch. The audio takes advantage of the soundfield with the rears getting a good amount of usage. Special effects such as guns blazing sound very good. Dialogue was well balanced through the center channel.
Audio Quality: 9/10

Tombstone is one of the best westerns made. I wasn’t looking for a history lesson, I can watch the history channel for that. I was looking for movie entertainment at it’s hyperbolic best. Every character; the good, the bad, the ugly are over the top. On Blu-ray the film offers above average video and excellent audio presentation. I am disappointed in the lack of extras when compared to the 2 disc DVD version released a few years ago.
Overall Rating: 8/10