Posted in DVD Reviews by George Theofanopoulos on 16 March 2011 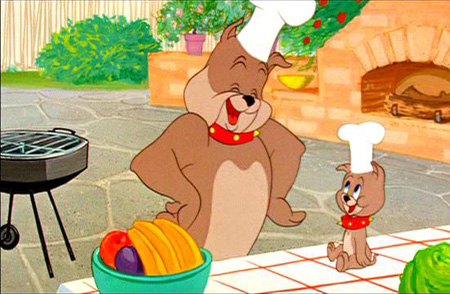 Whether on a cruise ship bound for Hawaii, in France during the era of the guillotine, or at a ranch deep in Texas, Tom the cat can be counted upon to pursue, and be outsmarted by, Jerry the mouse. Slapstick comedy reigns as Tom and Jerry are repeatedly shot full of holes, conked over the head with frying pans, and even venture into flamenco guitar playing and dancing. Tom and Jerry cartoons appeal to all ages, but the prevalence of violence necessitates parental guidance for young children.

Now, I would like to start by commending WB and the forces and talents behind the scenes who have worked long and hard to get this classic material out there on DVD. It is great to be able to own them in this format and the extra materials, such as the Bill and Joe Story and the Scott Bradley piece are very interesting and informative. This is true, particularly, of the Scott Bradley piece, in which Mr. Bradley regales us, in his own words, (dramatized from an article he wrote for a magazine in the 1940s) of his process and thoughts on scoring these wonderful shorts. It was very detailed and specific; intelligent and fascinating. I also enjoyed the stereo title that was very nicely presented.

That aside, I have to say, particularly with these “Tom and Jerrys”, these prints are NOT recently restored, (with the exception of the Cinemascope prints, which are gorgeous!). The majority of the prints are identical, wobble for wobble and scratch for scratch, to the ones offered on the Japanese DVD sets that have been out for some time. Yes, these shorts do appear somewhat sharper on DVD and the colors are saturated, but re-mastered, I think not. Just take a good look at “Designs on Jerry”, for one, and you will be convinced. There is so much debris on that print that it appears to be snowing on screen. In fact, most all of the standard prints on this collection have emulsion scratches and scrapes and “boogars” (as they say in the industry) and that is dismaying to say the least. Compare these Tom and Jerry shorts to the ones in the Looney Tunes collections, (where they actually DID go back to the original materials and re-master the shorts) and you will easily see the difference in quality. Why, even the sound on most of the Tom and Jerry selections is garbled during the first few feet of film and that is just ridiculous.

Actually, I was surprised to read that a few of the reviewers on Amazon comment on the fact that these cartoons have “never looked and/or sounded so good”. They actually look and sound very much the same as the prints on Boomerang and Cartoon Network, or in past releases of the material in different formats, (in some cases worse) and appear to be the same prints, redone around 1995.

Most cartoons remind me of my childhood and that’s exactly why I got the DVD. Who can ever forget Tom and Jerry getting on each other’s case? Some cartoons are edited to reflect political correctness. I have no problem with that personally. Production quality is top notch. Good mix of cartoons. If you get this one, you might just want to get the rest.
Overall Rating: 9/10