To Live and Die in LA Blu-ray Review 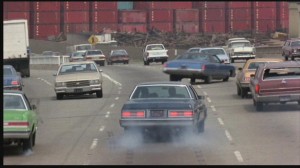 William Friedkin briefly revived his faltering career with this sleek, bleak thriller of a pair of secret service agents on the trail of a counterfeiter. William L. Peterson is the hotshot protégé of a career agent killed by the ruthless, almost feral counterfeiting genius Willem Dafoe (Platoon). Now Petersen, teamed with the smart but still green John Pankow (TV’s Mad About You), is ready to twist arms, lean on criminals, steal, and even murder to exact his revenge. The harrowing chase through the streets of Los Angeles that climaxes on the freeway at rush hour, where Friedkin’s brilliant twist sends them heading the wrong way, careening through a sea of cars coming straight at them, is still one of the most breathtaking car chases ever filmed. Friedkin’s edgy crime thriller, stylishly shot in steely blues against hazy red and orange skies by Robby Muller (Paris, Texas), paints a very thin line between the good guys and the bad guys, and Wang Chung’s techno soundtrack sets the proper mood–jumpy and alienated. It’s a cynical and very brutal look into the world of law enforcement (adapted by Friedkin and former Secret Service man Gerald Petievich from his novel) and a cold portrayal of the power games between cops and feds, and cops and informants. John Turturro, Dean Stockwell, and Robert Downey Sr. are featured in supporting roles. 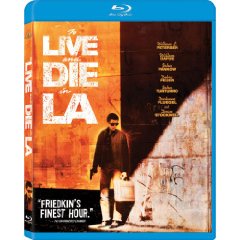 The story of a Secret Service agent played by Petersen who is determined to stop at nothing in order to take down his adopted nemesis; a counterfeiter who poses during the day as an artist. The complexity of their differences is astounding. Petersen’s character, Chance, is the type of guy who lives by the seat of his pants. He’s always taking risk after risk with his own life. He’s hotheaded and tempermental. With a personality like this, it’s amazing he’s a Secret Service agent whom we first see guarding the President!

Meanwhile, Dafoe’s character: Masters is the polar opposite. He’s disturbed, like Chance, but he takes his craft, his art, his talent and puts it where far too many people don’t: he makes money for himself…litterally. He not only forges legal tender, but sells what he makes. The action in To Live and Die in L.A. is a pure adreneline rush. It’s nice to see Petersen running and dodging danger with gusto not seen in his more subtle, laid back approach to his CSI role. The infamous car chase is one of the best filmed to date. Just when the audience thinks it may be close to completion, another obsticle stands in the heroes way, then another, and another!

Then there’s the ending, shocking to say the least. I believed I heard everything there was to know about the film, but then the last fifteen or so minutes blew me away. But of course, if one should decide to give someone else a tour of pure 80’s style action films, this should not be the first. The music, albeit considered classic now, shows its age. The style, far from lackluster, is obviously low budget. The budget doesn’t hurt the story, script, directing, or flow, mind you, it is just something which could go unappreciated by first time watchers.
Movie Quality: 8.5/10

The print is presented in 1080p/AVC MPEG-4 with a 1.85:1 aspect ratio. The print does not hold up well after all these years especially with this transfer to Blu-ray. Colors are washed out and look rather muddy. It does not help at all that black levels are not strong and then very inconsistent. There is grain throughout the film with added noise in the background. To say the least, I was rather disappointed with this transfer.
Video Quality: 6/10

The audio is presented in DTS-HD MA lossless 5.1 mix. This film is mainly front centered due to the age of the film. Dialogue is well channeled through the center sounding very crisp. Sound effects such as gunshots are lacking that much needed punch. Then there are times where the audio mix is lacking sounding rather flat.
Audio Quality: 7/10

This the movie is well worth the price of admission. For Friedken Fans, for Willam Petersen fans, for Willem Dafoe fans. The characters are rich and very strong from start to finish. This is the type of action movie and cat-and-mouse game a lot of films have forgotten here so many years later. I was left disappointed with video mix being subpar, while the audio is decent for a film from the early 80’s.
Overall Rating: 6/10