Titans is a live-action drama series that follows a group of young soon-to-be Super Heroes recruited from every corner of the DC Universe. In this action-packed series, Dick Grayson aka Robin (series star Brenton Thwaites) emerges from the shadows to become the leader of a fearless band of new heroes – including Starfire, Raven, Beast Boy and many others. DC Universe’s first original series follows this group of young heroes as they come of age and find belonging in a gritty take on the classic Teen Titans franchise. When Dick Grayson and Rachel Roth aka Raven (series star Teagan Croft), a special young girl possessed by a strange darkness, get embroiled in a conspiracy that could bring Hell on Earth, they are joined by the mysterious Kory Anders aka Starfire (series star Anna Diop) and loveable Gar Logan aka Beast Boy (series star Ryan Potter). Together, they become a surrogate family and team of heroes. 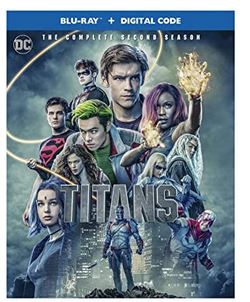 So much so that it almost feels like you’re watching an entirely different show. However, the writers still aren’t quite there yet. The “team” spends most of the season apart, and when they are together all they do is argue and point the blame. The Trigon arc is wrapped up easily in the season premiere, and the rest of the episode is a soft reboot set months later. Similarly, season 2’s multiple ongoing arcs are quickly wrapped up so the writers can tease what’s to come in season 3. I hope by then the writers have figured out what works and what doesn’t. There are far too many characters, and the writers struggle to give each of them something meaningful to do. I think this show would benefit from more than just 13 episodes, and perhaps a more episodic approach to storytelling while teasing a much longer ongoing arc.
Movie Quality: 9/10

The print is presented in 1080p/AVC with a 1.78:1 aspect ratio. I have to say that I am pretty impressed with the image quality. This show looks really good in its transfer to Blu-ray. While some maybe disappointed because some of the lower quality CGI in some episodes, that doesn’t detract from an excellent looking transfer. Colors are strong throughout and vary from episode to episode to fit with the atmosphere. Details are great especially with scenes where the camera is up close. Black levels are very strong considering that the series has many dark scenes throughout each episode. There is also grain and noise throughout the transfer, it never becomes obtrusive or distracting. Fans of the show will not be disappointed the slightest.
Video Quality: 9.5/10

I was really surprised that season 1 was as good as it was. So I had high expectations for season 2. I was not disappointed. I think it got even better!
Overall Rating: 8.5/10