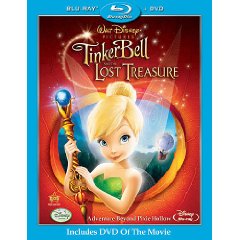 The tale of Disneys favorite fairy, Tinker Bell, continues in an all-new magical adventure beyond Pixie Hollow! Discover how the Pixies make their magic dust! Let your imagination soar as Autumn comes to Pixie Hollow. Take off in a hot air balloon with Tinker Bell and her new friend Blaze, a lightning bug who lights her way, on an enchanting secret journey to find a new moonstone, the source of the Pixies mystical dust. But hold on tight! There ll be amazing encounters, some close calls, and a daring rescue by her old friend Terence! In her biggest adventure yet, Tinker Bell not only learns a lesson in responsibility, she discovers the true meaning of friendship. From the creators of Tinker Bell, Tinker Bell And The Lost Treasure is a captivating journey of self-discovery everyone will want to take.

I was less than impressed by the first Tinkerbell movie, the huge apparent difference from the original Peter Pan movie, and the computer generated animation. I’m also a little skeptical on these “straight to DVD” releases, which are usually of inferior quality, and often akin to the TV animated series (the second and third Aladdin movies immediately spring to mind). This time around they have done it right however, with wonderful storytelling and engaging characters. I’m reviewing the Blu-Ray here specifically and have to say that the picture quality is amazing.

The follow up, Tinker Bell and the Lost Treasure, finds Tink back in Pixie Hollow on a brand new adventure and with some new friends to boot. Along the way we’ll see some quite impressive animation effects, and even learn a lesson about personal responsibility as well. My young daughter was completely mesmerized by the story, and it was even fairly engrossing from my perspective as well.
Movie Quality: 9/10

The print is presented in 1080p/AVC MPEG-4 with a 1.78:1 aspect ratio. I was impressed by the image quality of the last ‘Tinkerbell’ release on Blu-ray. Colors are vibrant and just pop right off the screen. I couldn’t believe how bold colors are in this film, that I had to view scenes more than once. Details are amazing with this film and they show the fine details in the characters, such as strands of hair, the vegetation looks lifelike, and look at the fur on the squirrel. Anytime there are dark scenes, they are bold in color and look beautiful.
Video Quality: 9/10

The audio is presented in DTS-HD MA lossless 5.1 mix. While this film is not going to shake the room or shatter your windows, it does an excellent job providing a rather crisp sound. You can’t forget the magical pixie-dust, which sounds crystal clear through your surrounds. The soundtrack also comes in at the right moments where it helps keep consistent sound throughout. The dialogue is at the right mix which sounds very clear. The soundtrack does sound good and the sound effects are also great but are a bit on the lighter side.
Audio Quality: 9/10

In a world that seems determined to make children grow up as quickly as possible, you have to give Disney credit for putting together some products that simply let them be kids. On Blu-ray this package is very well done including the DVD. This is highly recommended for the whole family.
Overall Rating: 9/10