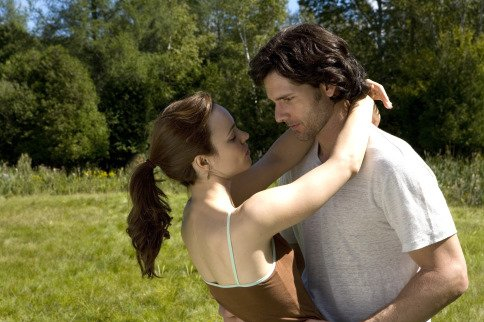 Lose yourself in timeless love with this gloriously romantic story of the journey of two hearts. Artist Clare Abshire (Rachel McAdams of The Notebook) shares a deep emotional bond with Henry De Tamble (Eric Bana of The Other Boleyn Girl), a handsome librarian who travels involuntarily through time. Knowing they can be separated without warning, Clare and Henry treasure the moments they have together, imbuing them with the yearning and passion of two people imprisoned by time…and set free by love. Based on the #1 bestseller, The Time Traveler’s Wife weaves together destiny and devotion, past and future to turn an extraordinary love into an extraordinary love story. 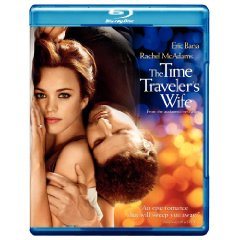 Bana plays Henry well as a sorrowful boy/man with the frustrated angst of someone with a dark cloud hanging over his head. McAdams, while undeniably pretty–all big eyes and Madonna (not the rock star) forehead does not generate enough gravitas for me as the besotted, concerned and dependent Claire. Blanchette in `Button’ would have been better in this role of doomed from the start–she exudes maturity that Claire would have needed. McAdams (The Notebook (New Line Platinum Series)as vulnerable child/woman works well initially–but her older Claire doesn’t quite register with any depth and as a mother to Alba–the couple’s time-traveling child–she seems more an older distraught sister.

“The Time Traveler’s Wife” combines science-fiction, romance and melodrama in a two-hour slot. Add insult to injury and imagine a man that cannot control when he’s bouncing out of town and leaving his wife with all the responsibilities and not even leaving a contact number. The naked Bana popping randomly around to glimpse the young Claire which was very very odd.

In retrospect, this whole concept of the time-traveler flitting in and out of the events that encompass his life and go beyond his lifespan would make an interesting television series. The romance between the husband and wife would be both romantic and poignant and like all good episodic shows there could be a one hour resolution to that week’s story while the larger story of Henry searching for something that will allow him to control his disappearances would keep the momentum going.
Movie Quality: 5/10

The print is presented in 1080p/AVC MPEG-4 with a 2.35:1 aspect ratio. The print is one of the better ones that I have seen for a comedy film. Colors are vivid and bright providing a nicely saturated presentation. Blacks are solid throughout the print. Flesh tones are natural looking with no enhancement. Details look very good in this film providing excellent depth.
Video Quality: 9/10

The audio is presented in DTS-HD MA lossless 5.1 mix. This is a more dialogue driven film with excellent audio for the premise of the film. With this being a drama, there are no action sequences, so don’t come in expecting a bombastic mix. Dialogue is very clean and crisp through the center channel. We have more of a front heavy experience with the mix as dialogue also tends to pan between the front speakers. When the rears get are in use, you hear a few sound effects and the score.
Audio Quality: 9/10

‘The Time Traveler’s Wife’ was not a film that I enjoyed and contemplated several times throughout to just quit watching. This was one of those films that loses the viewer due to the time traveling. On Blu-ray the video and audio presentation are top notch. Special Features are a bit on the lighter side of things. If you were a fan of the book adaptation I would give this a viewing, others a rental might be enough.
Overall Rating: 8/10