Posted in DVD Reviews by George Theofanopoulos on 01 July 2011
Tom Hulce is Artie Shoemaker, a college student who is taking all pre-med courses, less out of interest than because of his father, a hard-working junk man. This is one of those families in which the fetus is not considered viable until it graduates from medical school. Lamentably, Hulce’s heart is with the theater. A touring company is in the small town over the summer of 1951 to present operettas and Hulce, who would like some day to perhaps be a playwright, is hired to buggy lug properties around and generally assist in the stagecraft. 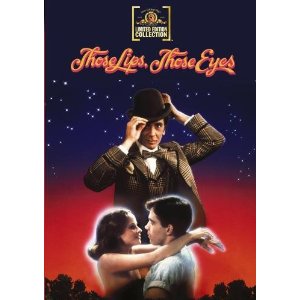 Over the course of the summer, Hulce comes to know the actors and crew rather well. The leading man, Frank Langella, becomes a kind of brusque but perceptive mentor, showing him the ropes. He also gets to know one of the petite rats who dance behind the singers, Glynnis O’Connor. There are other assorted presences, chief among them George Moforgen as the obnoxious, insulting director.

Hulce quits his tough courses and develops plans to move to New York and write for the stage. This perturbs Tom Hulce’s father, Ben Stiller, no end. Hulce explains to his Dad that he may wind up winning awards. “You know what?”, Stiller exclaims, “I hope you do. I hope you win a Nobel Prize because, believe me, if you quit college you’re gonna need it.” That’s common sense talking for you.

On the other side of the ledger, Hulce falls for the lovely Glynnis O’Connor who looks like the kind of high-school classmate that every boy dreams about — before he goes to sleep. He winds up spending a night with her too. And at HER invitation. “C’mon, let’s make a memory,” she says, turning off the lights and slipping out of her hampering garments. She’s a pretty toothsome morsel in the nude. Hulce gawks in rapturously. “You just do what I do,” she murmurs. Well, I’m glad there was this gratuitous nudity — all nudity in scenes like this being gratuitous. But I must say, this is 1951? And SHE is seducing HIM? That’s not how I visualize 1951.

Anyway, so that’s the central conflict in the plot. Will the adolescent Tom Hulce, in the Mathew Broderick part, continue his education and become the fantastically wealthy and universally respected doctor his father wants him to be? Or will he “follow his bliss”, as Joseph Campbell would have advised, and go on to be a gargantuan failure on Broadway. OY. Vot a Jewish story DIS is! Didn’t Al Jolson suffer a similar conundrum in “The Jazz Singer”? Well, “all that glitters is not gold,” as Cecil’s “Textbook of Medicine” says. Langella’s leading man is dying to get back to New York and leave the sticks and their damned cicadas far behind, but his agent, Kevin McCarthy, is neglectful and keeps putting him into touring companies for now and for the foreseeable future as long as such parts exist. And the luscious Glynnis O’Connor has the same longings, but in her case, after an hour or two spent with the smitten McCarthy, she finds herself with a part in a Cole Porter musical on Broadway. Also, she’s married, which perhaps explains her casual carnality.
Movie Quality: 8/10

The ending is bitter and sweet at the same time. Hulce is disillusioned but grown up. He decides to return to pre-med and drop his grandiose theatrical plans. He doesn’t quite make it into medical school but becomes an orthodontist instead. “He’s the best dentist in Tecumsah County, maybe the whole STATE!”, boasts Ben Stiller. I made that last part up, although it might have happened.
Overall Rating: 8/10