Posted in DVD Reviews by George Theofanopoulos on 27 September 2011
The great halls of Asgard have fallen silent since a new king has overtaken the throne. His name is Loki, son of almighty Odin, brother to the Thunder God, Thor. Once a powerful trickster, the God of Mischief, Loki now rules a grand kingdom with little regard for its subjects. His only thoughts are focused inward, toward the origins of his own pain and suffering. To quell his torment and to gain the respect he feels he so rightfully deserves, Loki must now execute the prisoner chained deep within the dungeons of Asgard, the one man who has ever shown him love. His own brother. 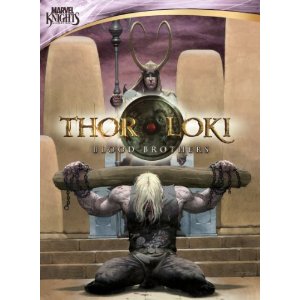 I loved the comic mini series by Rodi and Ribic that came out some years ago and I love the visual take Marvel Knights have created based on it. This is not superhero “Hulk smash” material, but a powerful character study of a villain. As in the comic, the visual rendition is lush, even stunning and the language is beautifully medieval. At approx. 74 min. runtime, a bit more than 50 if you don’t count repeating intros and outros, the animation style is reminiscent of a web comic, yet superior as character sketches are subtly animated and mixed with CGI to create the feeling of medieval cut-outs. Beware, this is not your every day cartoon. Just as “Watchmen” was the first graphic novel, this may very well be the first cartoon theater play, the topic being as meta as the two-dimensionality of comic characters. The creators of this animation are to be commended, as they have tried to make a cartoon for adults only (no, not THAT kind) and succeeded. It is truly a thing of beauty, a joy for ever. Movie Quality:7/10

The story starts off pretty well with Thor being captured and held prisoner by Loki. Loki, now the king of Azguard. So for Thor fans, i suggest you go for it..and enjoy.
Overall Rating: 7/10