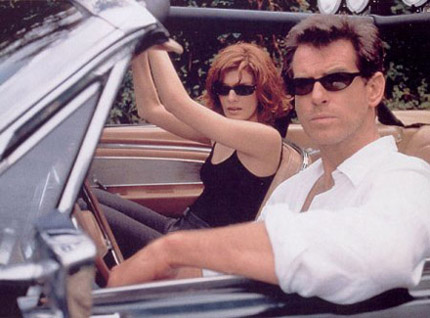 What makes this Thomas Crown more enjoyable than its predecesor is McTiernan’s attention to detail in both the set action pieces (no surprise from the man who helmed Die Hard with precision accuracy) and the developing romance, the witty and intelligent script by Leslie Dixon (she wrote the love scenes) and Kurt Wimmer (he wrote the action scenes), and, most of all, its two stunning leads (both over 40 to boot), combustible both in and out of bed. Brosnan, usually held prisoner in the James Bond straitjacket, lets loose with both a relaxed sensuality and a comic spirit he’s rarely expressed before. The film, however, pretty much belongs to Russo, who doesn’t just steal the spotlight, but bends it to her will. Beautiful, stylish, smart, self-possessed, incredibly sexy, she’s practically a walking icon; it’s no wonder Crown falls for her hook, line, and sinker. With Denis Leary as a police detective smitten with Russo, and Faye Dunaway in a throwaway but wholly enjoyable cameo as Brosnan’s therapist. 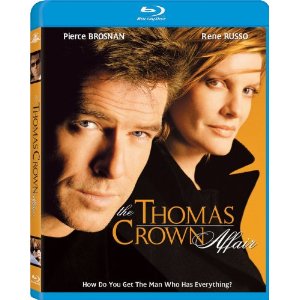 Slick, stylish remake of 1968 film which had Steve McQueen and Faye Dunaway in lead roles. This time we have Irish actor Pierce Brosnan and Rene Russo in a formula love story similar in many aspects to James Bond movies from the late 90s, which coincidentally starred Pierce Brosnan.

If you want a safe, entertaining movie to watch with a girfriend or wife then this fits the bill. Don’t be deceived by the art-heist caper as it is simply a hook to connect billionaire Wall Street crook Thomas Crown (Pierce Brosnan) with insurance investigator Catherine Banning (Rene Russo). Females love Rene because she is not a stunning, hot-body and provides subliminal hope to all average looking girls.

In reality this is just an old-fashioned Hollywood love story in which rich playboy falls for poor, working girl. He dazzles her with expensive restaurants, jewelry and trips. She pretends to play hard-to-get but in the end succumbs to his money and lifestyle. Story ends with them embracing and kissing.

In spite of slick production and excellent direction by John McTiernan, the script by Leslie Dixon and Kurt Wimmer has glaring problems. Leslie wrote the love scenes and Kurt the action sequences. Approximately 12 minutes into the film and two days after the heist of a $100 million Claude Monet painting from a New York City musuem, insurance investigator Rene Russo while guzzling a can of Pepsi One in a New York Police Department precinct office has a mind-boggling revelation: billionaire Wall Street financier Thomas Crown is the thief. She rushes to a computer terminal and with four keystrokes generates a report about all top bidders at worldwide auctions during the previous five years for Claude Monet paintings. Voila, Thomas Crown is consistently among the top bidders.

Then with nothing more than the auction report and her feminine intuition, Rene confronts Pierce. And, so begins the cat-and-mouse romance. Rene has a dossier about Pierce and Pierce a dossier about Rene. She is from a poor family in Lima, Ohio and has clawed her way into the world of high-paid of insurance investigators with a gig for some rich Swiss.

The print is presented in 1080p/MPEG-4 with a 1.85:1 aspect ratio. Colors were strong taking advantage of the color palette, yet providing a softer image in some areas. Blacks are deep providing a nice crushing effect. Fleshtones are detailed throughout the entire print. Details are well done throughout the film with some scenes looking really good. There is also a thin layer of grain which never gets distracting and very consistent.
Video Quality: 8.5/10

The audio is presented in DTS-HD MA lossless 5.1 mix. I was a tad bit disappointed with the audio mix as it lacked that extra needed oomph when the soundtrack and action sequences were in play. This was more of a front heavy experience than a dynamic aural mix. I found the mix to be a little bit on the lower side than expected. I was rather surprised by the underwhelming audio mix considering the type of film that this is, an action caper.
Audio Quality: 6.5/10

The remake is not bad of a film, but I can’t imagine saying it is better than the original, with the one and only Steve McQueen. On Blu-ray this film offers a nice video presentation, but a surely lacking audio mix as I expected more from this. The only special feature is available on the DVD, which is a total disappointment.
Overall Rating: 6/10