There’s Something About Mary Blu-ray Review 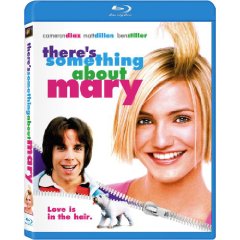 There’s Something About Mary is one of the funniest movies in years, recalling the days of the Zucker-Abraham-Zucker movies, in which (often tasteless) gags were piled on at a fierce rate. The difference is that cowriters and codirectors Bobby and Peter Farrelly have also crafted a credible story line and even tossed in some genuine emotional content. The Farrelly brothers’ first two movies, Dumb and Dumber and Kingpin, had some moments of uproarious raunch, but were uneven. With Mary, they’ve created a consistently hilarious romantic comedy, made all the funnier by the fact that you know that they know that some of their gags go way over the line.

Cameron Diaz stars as Mary, every guy’s ideal. Ben Stiller plays a high-school suitor still hung up on Mary years later; the obstacles standing between him and her include a number of psychotic suitors, a miserable little pooch, and, oh yeah, a murder charge. The Farrellys’ admittedly simplistic camera work, which adapts easily to a TV screen, and the fact that you’ll likely laugh yourself so silly over certain scenes you’ll want to replay them to see what you were missing while you were busy convulsing, make this a perfect video movie.

The Farelly brothers who have in the past delivered such cinematic masterpieces as ‘Kingpin’ and ‘Dumb and Dumber’, are back at what they do best, and they are bigger, (maybe) better and (definitely) more gross than ever. Boldly throwing caution and any semblance of good taste to the wind, they deliver a chuckle-fest that might shock, disgust, and repel, but will without fail leave the viewer in splits.

A lot of attention was put on the gross-out gags during the film’s initial release, but these moments only tell part of the story. What really puts Mary over the edge are the smaller moments, and a lot of that credit has to go to Matt Dillon. As the shady, none-to-bright claims investigator Pat Healy, Dillon gives of the best best performances of his career. Healy is a terrific comic invention, a man so unaware of his repulsiveness he actually thinks he’s being sensitive when he tells Mary he “loves to work with retards”. Healy is the ultimate Farrelly character, a man who is so completely out-of-touch that he doesn’t notice how much a fool he makes of himself. It’s a performance that would make W.C. Fields proud.

The other performances are solid as well. Cameron Diaz is perfectly cast as Mary, a woman that defines female perfection from a male’s point-of-view, and Ben Stiller began honing his screen persona, an everyman up against circumstances beyond his control, with this break-out role. But nobody defines Mary’s success as much as Dillon and the Farrellys’ innate comedic geniuses. Not every single scene works, but it hits on so many right notes that it remains a great comedy classic.
Movie Content: 9/10

The print is presented in 1080p/AVC MPEG-4 with a 1.85:1 aspect ratio. This is an alright upgrade on Blu-ray over the DVD. I have owned the film on DVD since its release and have viewed it several times. Considering that the film is 11 years old, I expected a little bit more from the print. The print has a rather soft look to it with the color palette having a dull look to it. Black levels are deep throughout the film. There is no grain present. One area that is inconsistent is details where in some scenes they look above average and others makes you wonder if you are still watching a Blu-ray film. I was somewhat disappointed that the film didn’t fair better in high definition.
Print Quality: 7/10

The audio is presented in DTS-HD MA lossless 5.1 mix. With a lackluster video presentation, the audio also takes a step back with this release. There wasn’t much coming through the rears as expected considering that there is a musical soundtrack throughout the entire film. I also found dialogue to be on the lighter side where I had to adjust my volume.
Audio Quality: 7/10

The story is a little too dim-witted at times jumping around from a axe-murderer hitchhiker, to a trip to the emergency room on prom night, to a dog set on fire– to the guy that loves Mary’s shoes. I’ve watched this movie way too many times and I still laugh every time I see it. Fans of the film might be a bit apprehensive upgrading their 2 disc DVD as the video and audio aren’t the greatest in high definition.
Overall Rating: 8.5/10