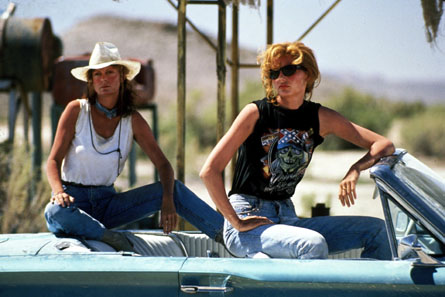 Thelma & Louise is a feminist manifesto writ large on the big screen, a smart and funny gender reversal of the standard Hollywood buddy formula, a road movie extraordinaire, with characters who became instant cultural icons. No matter how you define it, Ridley Scott’s 1991 box-office hit pinched a nerve and made the cover of national news magazines for tweaking gender politics like no movie before or since. Callie Khouri’s screenplay overhauls the buddy formula with its story about two best friends (Susan Sarandon and Geena Davis) who embark on a liberating adventure that turns into an interstate police chase after a traumatic incident makes both women into fugitives; they are en route to a destiny they could never have imagined. The perfect casting of Sarandon and Davis makes Thelma & Louise a movie for the ages, and Brad Pitt became an overnight star after his appearance as the con-artist cowboy who gives Davis a memorable (but costly) night in a roadside motel. 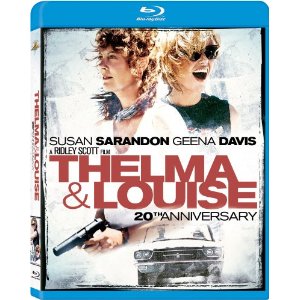 “Thelma and Louise” is all and none of the things as which it has been described. It is about the friendship between two women, about female independence and male sexism, but it is neither a simple “chick flick” nor a monument to feminism (although I have to admit that watching it can have an almost therapeutic effect when you’ve just about “had it” again with the male slightly-less-than-half of society). Most of the men that Thelma and Louise encounter are two-dimensional cartoon characters, but “Reservoir Dogs” and perpetual tough guys Harvey Keitel and Michael Madsen (of all people) are cast against stereotype. The movie also features some absolutely stunning pictures of the Southwestern scenery and mostly takes place on the road, but it is not just a “road movie” (feminist or otherwise).

More than anything, this is a movie about the things that shape the way we are, and about the consequences of our actions. Had Thelma learned to use her brain before and not after their encounter with Harlan the rapist, she would have seen him for what he was and avoided him from the start. Had Louise not been raped herself, she would probably not have shot Harlan at being provoked by him, after the self-defense situation was already over. Impulse? Fate? Justifiable homicide? Hardly. Thoroughly understandable? Absolutely, at least from a woman’s point of view.

It takes two extraordinary lead actresses to carry the movie’s theme, and Susan Sarandon and Geena Davis are the perfect embodiment of the characters they portray. Next to them, not even Keitel and Madsen really shine (although this may be in part due to the thankless parts they play); only Brad Pitt, in the role that made him an overnight star, briefly gets to sparkle. Callie Khourie was a deserving winner of the 1991 Academy Award and Golden Globe for Best Original Screenplay, and both Sarandon and Davis would have been equally deserving of the Best Leading Actress awards. So would have Ridley Scott for Directing, Adrian Biddle for Cinematography, Thom Noble for Editing and the movie itself, for Best Drama — in a year that produced many extraordinary films, it might have been more just to split some of the awards among several contenders, and despite the strong competition (“Bugsy,” “Silence of the Lambs,” “Prince of Tides,” “The Fisher King,” “Grand Canyon” and “Fried Green Tomatoes,” to name just a few), it seems sadly underrated for a movie that has long since become a cult classic to only have won one of the awards it was nominated for, both on Oscar Night and at the Golden Globes.
Movie Quality: 9.5/10

The print is presented in 1080p/AVC MPEG-4 with a 2:35:1 aspect ratio. Having owned previous incarnations of the DVD release, especially the original 2001 DVD release, one thing I have noticed on Blu-ray is how vibrant the colors look on Blu-ray. From the golden weeds, the desert sand, and grass that surround some of the scenery in this film. You can literally see the shading, detail, and textures of clothing really shows how well this print has been restored. Blacks are nice and deep with there is a fine layer of grain. Colors are nice and strong throughout, yet there are a few several soft spots. If you are a fan and own the film on DVD, make sure to upgrade to the Blu-ray.
Print Quality: 9/10

The audio is presented in a DTS-HD MA lossless 5.1 mix. This is a huge upgrade from the Dolby Digital 5.1 mix on the original DVD release. As the majority of the film features dialogue, when there’s action…the lossless soundtrack does a good job in making those scenes quite immersive by utilizing every channel. Even in non-action scenes, you can feel the lossless track has really added to the audio mix with deeper dialogue through the center.
Print Quality: 9.5/10

“Thelma & Louise” is one of the finest movies I’ve ever seen. In terms of acting, pacing, writing, cinematography and soundtrack, it is perfect in all aspects. The two main characters could’ve easily been cliched 2-D cutout rip-offs of Bonnie & Clyde or Butch Cassidy & The Sundance Kid, but the script injects them with enough originality and depth to set them apart. This is also thanks to the the fantastic performances of the two leads, Geena Davis and Susan Sarandon, who put on tow of the finest performances in all of cinema.
Overall Rating: 9/10