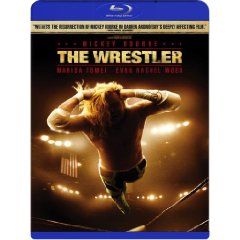 The mystery of Mickey Rourke’s career comes to a grungy apotheosis in The Wrestler the much-battered actor’s triumphant return to the top rope. He plays Randy “The Ram” Robinson, a heavily scarred and medicated battler who’s twenty years past his best moment in the ring. But he still schleps to every second-rate fight card he can get to, stringing out the paychecks (more likely a fistful of cash) and nursing what’s left of his pride. His attempts to adjust to a more normal kind of life form the most absorbing sections in the movie, whether it’s flirting with a stripper (Marisa Tomei is in good form, in every sense), establishing a bond with his understandably angry daughter (Evan Rachel Wood), or working behind the deli counter at a nondescript megastore. Rourke is commanding in the role; he obviously spent hours in the gym and the tanning salon, and his ease with the semi-documentary style adopted by director Darren Aronofsky allows him to naturalistically interact with the colorful real-life wrestlers who crowd the movie’s ultra-believable locations. All of which helps distract from the film’s overall adherence to ancient formula. You might find yourself waiting for the scene where the risk-taking Aronofsky (Requiem for a Dream) pulls the switch and reveals his true motives for pursuing this otherwise sentimental story, but there’s no switch. The Wrestler is an old-fashioned hoke machine, given grit by an actor who doesn’t seem to be so much performing the role of ravaged survivor as embodying it.

‘The Wrestler’, the latest film from the director and master of cinematography, Darren Aronofsky. Aronofsky became famous with ‘Pi’ and ‘Requiem For A Dream’. His movies are a tad bit hard to follow due to his style. However, the cinematography of those films is amazing and both those movies ask huge questions about life and its meaning. ‘The Wrestler’ is a movie that is the complete oppostie from anything Aronofsky has directed before.

‘The Wrestler’ follows Randy “The Ram” Robinson (Mickey Rourke) from his rise and fall in the wrestling world but also trying to hold on to a dream. This film takes what we loved about wrestlers from the 80’s like Hulk Hogan, Ric Flair, and Terry Funk to name a few that wouldn’t hang it up in the ring until it tarnished their legacy to a degree. In the 1980s Randy was a hugely popular “professional” wrestler. He was so popular that there was an action figure of him and he was a popular character on a hot-selling video game. Randy had to have made a lot of money during his career, but the movie never explains what happened to his fortune. Instead, when we meet Randy he’s still wrestling when he can, but he lives in a rented trailer that he often pays for late and is works part-time in the loading docks of a grocery store to make ends meet.

He spends most of his evenings at strip clubs and at one in particular he has a favorite girl, Cassidy (Marisa Tomei) that he finds himself developing feelings for. One night after a particularly physical grueling match, Randy looses conscience in the dressing room and when he awakes he finds himself in a hospital. It turns out that Randy has had a heart attack. The doctors say he will recover, but tell him he can’t wrestle again. His heart attack leads Randy to do some soul searching. He attempts to let Cassidy know how he feels and reaches out to his college-aged daughter, Stephanie (Evan Rachel Wood). Randy really is a likeable guy who, like many people, makes mistakes and ends up hurting those he loves. He knows the wrestling and the life of the ring, but outside of that he is lost. He really does make an effort of changing, but the odds are still against him.

I had a great time with ‘The Wrestler’ and enjoyed the film a whole lot. Mickey Rourke really gave an excellent performance that should have probably won him an Oscar. Then add both Marisa Tomei and Evan Rachel Wood that also give wonderful supporting performances and this is something special. Again, this is not a film that everyone is going to enjoy but fans of professional wrestling will connect.
Movie Content: 9.5/10

The print is presented in 1080p/AVC MPEG-4 with a 2.35:1 aspect ratio. ‘The Wrestler’ has the look and feel of a documentary which has the look of being shot with a handheld camera. This gives the film that needed gritty feel because it just fits perfectly with the material. There is grain throughout the film which in a few scenes is a tad bit heavier, but is natural looking in presentation. Flesh tones have a natural look to them. Black levels provide some excellent depth. Details can be excellent in some scenes while hazy in others, but this is the director’s intent.
Print Quality: 9/10

The audio is presented in DTS-HD MA lossless 5.1 mix. While the video may not scream high definition even though it was intended to be filmed like this, the audio is very impressive. This is one film where the soundtrack takes advantage of the soundfield especially putting the rears and bass to work. Dialogue is clear and crisp through the center channel.
Audio Quality: 9.5/10

‘The Wrestler’ is an excellent film that all professional wrestling fans that especially grew up watching from the 70’s and 80’s owe it to themselves to watch this movie. Originally Hulk Hogan was vying for this role and I am happy that he didn’t get it even though from a truth standpoint some of this film is about wrestlers like him that couldn’t give up the spotlight. On Blu-ray the film provides some excellent audio which caught my by surprise. This is a highly recommended film for wrestling fans, but also for fans of sports in general as we see many athletes across all sports never wanting to hang it up as it is the only profession that they know.
Overall Rating: 9/10