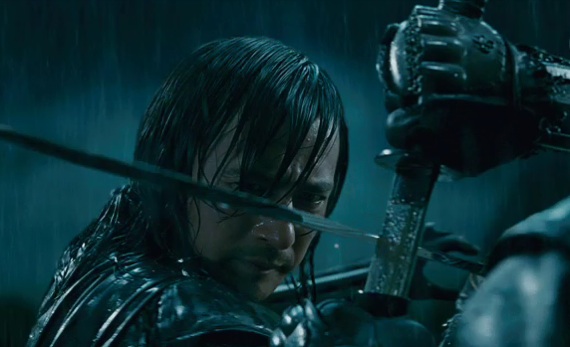 “This is the story of a sad flute, a laughing baby, and a weeping sword,” a voice intones at the beginning of The Warrior’s Way. It’s also a story in which bullets fly, blood flows, and the body count mounts to the point where you’ll need a calculator to keep track, often to the accompaniment of a Verdi opera. Writer-director Sngmoo Lee’s film centers on a lone warrior named Yang (Jang Dong-gun), “the greatest swordsman in the history of mankind,” who has managed to wipe out all of his enemies save one, that being an adorable infant whom he refuses to murder, much to the displeasure of his boss, the leader of a band known as the Sad Flutes. For reasons never quite explained, our exiled hero soon finds himself in a thoroughly dilapidated town in the American west, where a half-finished ferris wheel looms and the inhabitants consist mainly of a bunch of worn-out circus performers (clowns, bearded lady, midget ringmaster, the whole shebang), the town drunk (Geoffrey Rush, a very long way from his Oscar-winning performance in Shine), and a beautiful young woman (Kate Bosworth, sporting a ridiculous accent) whose family was slaughtered by a local bad guy known as the Colonel (Danny Huston, suitably sadistic). 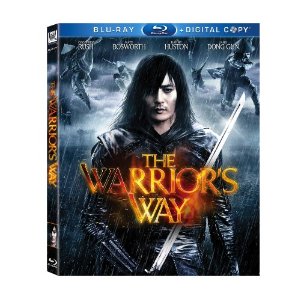 It’s similar to Sin City and 300 in tone, and in the fact that it gives an obvious sense that it’s totally filmed all in green screen with sets and props scattered about. The film knew it’s limitations and budget and decided to make the obvious background work fit into its style, just like Sin City. You never once get the impression that any of this is real or weighty, but you do feel the visceral shock and emotion of the story. The visuals are ramped up to 11, and it all seems very anime’ like. Which is good, even though I am getting oh-so-tired of this by now(especially after finally seeing Sucker Punch). This film works because it’s short and zippy and feels more genuine with its visuals than say Sucker Punch or other green screen films.

Also, the acting is all fun. Kate Bosworth shows up in this film, and while I liked her performance in Wonderland, she is not someone I get excited about when I see her name above a film’s title. She’s really good in this film as a knife thrower in a circus. She is a spitfire and very plucky. She has so much pluck in this character one has to wonder why she didn’t employ this trait of her acting repetoire in her portrayal of Lois Lane in Superman Returns. Geoffrey Rush, like always, is great and fun to watch. He’s becoming like Steven Buscemi or Christopher Walken in the sense that no matter how good or bad the film you’re watching is when he shows up you are enjoying yourself more, and more perked to attention. He plays an old drunk ex-gunslinger who has more than a little in common with the film’s main protagonist played by Jang Dong Gun. Gun has natural screen charisma and he manages to play the quiet anti-hero with a past with a twinkle in his eye that makes him seem relateable. And, egads, and Asian headlining an American film!!!! Nobody let Hollywood know or it may never happen again. Danny Houston(30 Days of Night) shows up to play a Western villain with a heinous scar on his face. He’s great and vile, but he must be getting oh so tired of playing the villain in every action movie EVER. I know I’m tired of seeing him in that role. Although he wears a pretty cool face mask, and has a thick Western Drawl that makes him unrecognizable, so it all seemed fresh despite his type casting.

The plot is irrelevant. It’s pretty simple and combines well worn tropes of both the Western and the Samurai movie, which in a way, those genres have always had a ton in common with each other. It’s all about kinetic action and emotions. The frames in the film are composed to resemble graphic novels and anime’. It’s very much a case of style over substance and it works. The characters are intersting enough, but I would’ve liked to spend more time with them than the film allows before the third act carnage arrives. But, hey, that’s the way modern movies work. Wouldn’t want the brain dead kids to get too bored or invested in people or their emotions. They might get up to buy more crap to stuff loudly in their faces during the movie.
Movie Quality: 7/10

The print is presented in 1080p/AVC MPEG-4 with a 2:40:1 aspect ratio. This is a very stylized film with blue tints and various dark colors that make the film pop. The color palette is very strongthroughout. The reason is due to the film’s nature, certain colors such as reds stand out the most. Black levels are deep with an ink like look. Details are excellent providing various sense of depth. Scenes up close and when the camera pans away show provide stunning details. This print pops off of the screen giving it a 3-D look and feel. This is a great example of how great films in this genre can look if done right.
Print Quality: 9/10

The audio is presented in a DTS-HD MA l0ssless 5.1 mix. This is one film that takes complete advantage of the lossless sound mix. FOX engineers take yet another action film providing top notch audio. This is a demo worthy mix that could easily sell those on the fence about the format. The soundfield is immersive at all times no matter if it is the special effects or dialogue. I was literally amazed with the amount of panning effects from each speaker in the rears. Bass was punchy as it shows with the amount of gunfire and explosions. Dialogue is also well placed in the center channel sounding crisp and clear.
Print Quality: 9/10

Fans of the fantasy, western and martial arts genres will find this one entertaining. They’ll enjoy the action. Add in a touch of romance here (and it’s a small touch at that) and you have a nice rental for the night.
Overall Rating: 7/10