The content from this season is first class, which is to be expected from this great series. Each episode is well researched and presented in a format that is easy to understand. If you’ve enjoyed the previous seasons of The Universe, the content of season 5 will not disappoint. 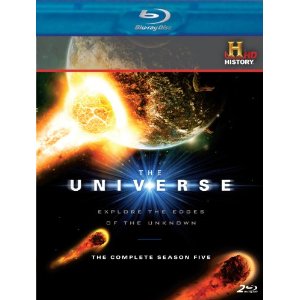 Of all the seasons, the fifth represents a hard sell for those who have followed the series thus far, because you’re getting less in more ways than one. The number of episodes per season has changed almost every year, but the fifth season has a disturbing lack of content with only 8 episodes, of which only 6 have worthwhile content and only 3 or 4 don’t feel like repackaged episodes from the prior four seasons. So what does this disappointing season have to offer?

The six quality episodes include “7 Wonders of the Solar System”, “Mars: The New Evidence”, “Magnetic Storm”, “Time Travel”, “Secrets of the Space Probes”, and “Dark Future of the Sun”. The material isn’t entirely new (as the series has covered a large portion of the topics under countless suns), but it covers subjects that any fan of cosmic concepts will find fascinating, even if the coverage never goes too far in depth.

“7 Wonders of the Solar System” starts off quite promising and continues in safe territory until the cheesy, terracentric #1 which you’ll see coming from a lightyear away considering the current trend of searching for new Earths in other solar systems. Saturnian satellite geysers, asteroid field planetoids, and a huge storm many times the size of our planet are genuinely fascinating which makes the episode’s content a good watch. For Mars conspiracy theorists, few episodes will hold as much allure as “Mars: The New Evidence” which covers all the recent press explosions surrounding the red planet and the discovery of water, the potential for life, and the hotly circulated photos of something resembling bigfoot on the planet’s surface (even though that was shown to be a trick of the light). “Magnetic Storm” has some pertinent bits about the inevitable shift of our planet’s magnetic fields and the understated benefit it provides by shielding us from solar emissions that could devastate all life on earth were it to weaken or vanish – something similar to which might occur when the planet’s magnetic poles switch. What more do we need to say about “Time Travel”? That’s always awesome, what with its talk about wormholes and the possibilities of time travel and its paradoxes. Those are the four episodes that don’t feel like total rehashes of past seasons’ entries.

Then we have “Secrets of the Space Probes” and “Dark Future of the Sun” which, while interesting, feature predominantly recycled concepts from episodes in past seasons. That our sun is going to die and potentially take us with it isn’t news for anyone who watched the first four seasons (or has read a single book on astronomy) and all of the footage from the space probes may be new, but the revelations have been mentioned before in episodes covering the mysteries of deep space. The two throwaway episodes, “Total Eclipse” and “Asteroid Attack”, which are recycled ideas in the grand scheme of this series and don’t offer anything it hasn’t covered ad nauseum already.

The fifth season of The Universe is, by far, the shortest season with only 8 episodes:

This series gives you the information to view in amazement the sky we live in. You will see the great unknown in a form you never imagined. We are such a small spec in both time and space and we will never get to visit the outer reaches beyond earth no matter how long we live.
Overall Rating: 7/10