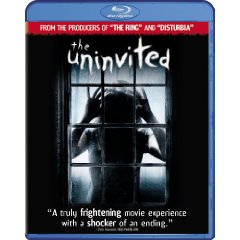 The china-doll features of Emily Browning (A Series of Unfortunate Events) are the eerie center of The Uninvited, an American remake of the wildly popular Korean horror film A Tale of Two Sisters. Browning stars as Anna, a young girl being released from a mental hospital following the harrowing death of her mother. But when she returns home, she discovers her father (David Strathairn) has fallen under the sexual spell of her mother’s former nurse, Rachael (Elizabeth Banks, Zack and Miri Make a Porno), despite the open hostility of Anna’s sister Alex (Arielle Kebbel, John Tucker Must Die). When Anna sees the ghost of her mother point at Rachael and scream “Murder!”, Anna and Alex begin to investigate Rachael’s past and make some unsettling discoveries. The Uninvited combines two horror trends: Twist endings (in this case, more than one) and recycling Asian horror images (particularly wet, crawling corpses). There’s nothing particularly outstanding about The Uninvited, but it’s superior to more lackluster Asian horror remakes like One Missed Call. The three lead actresses all have strangely glossy faces that look molded out of plastic, which adds a perhaps unintentional layer of creepiness.

‘The Uninvited’ is based on the popular Korean film `A Tale of Two Sisters’. This film is more than just a horror film as that is what I was expecting going in, but found more of a film based on tragedy with horror elements mixed in that will keep you in suspense the entire film. Do not go in expecting horror or some might be a bit disappointed. The theatrical trailer did make this film appear to be more horror driven, which is where some people may get the incorrect notion about the film.

This is a very smart film that adds the elements of horror, suspense, and creepiness that built up the film very well all the way to the end. There are a few twists and turns along the way especially once we get to the end when everything comes together full force. It left my jaw dropped to the floor and upon viewing this film a second time, the ending is something that I should have probably seen a mile away but the pacing of the film didn’t allow me to catch this until the ending.

With the film having an excellent atmospheric tone and a good story that paces very well, if the acting is bad then it hurts engagement of the viewer. Our main character Emily Browning does a well job portraying a teenage girl that is haunted by her dreams. The death of her mother has really done a total mental game that has disrupted life. Then add her sister Arielle Kebbel that plays her role rather well as they work together to solve the mystery behind their father’s girlfriend played by Elizabeth Banks whom has a mysterious past. They worry that she is going to hurt their father in the end so they try to damage their father’s relationship.

Some of the Asian horror films from the last few years remade here in the U.S. have not been that good. People’s expectations are rather high who have seen the original film which at times is even scarier than the remake. Maybe ‘The Uninvited’ will be a resurgence of the Asian horror films here in the U.S. in a more positive direction than the horrible ‘One Missed Call’.
Movie Content: 9/10

The print is presented in 1080p/AVC MPEG-4 with a 2.35:1 aspect ratio. he print actually looks stunning with a very nice looking color palette that pops. Black levels are deep throughout the film. There are a lot of black colors and dark scenes in this film. There is some subtle hints of grain in the print, but not as noticeable.
Print Quality: 9/10

The audio is presented in Dolby TrueHD 5.1 mix. he soundfield is spectacular for this film as it presents a spectacular sense of atmosphere. Sound effects such as screams, gunshots, banging, and broken glass sounds so crisp in the soundfield. The panning effects across the rears add to the atmosphere making this a creepier film. Dialogue is crystal clear and crisp through the center channel.
Audio Quality: 9/10

All features are presented in high definition. Paramount really skimped out on the special features here providing only three features.

‘The Uninvited’ is a clever remake of an Asian film that does a great job in pulling in the viewer and keeping them intrigued till the end. I highly recommend this film on Blu-ray as it provides excellent video and audio quality.
Overall Rating: 9/10