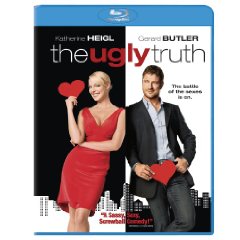 Katherine Heigl and Gerard Butler star in this wildly funny battle of the sexes. Abby (Heigl), a successful morning show producer, is looking for a lot in a man. Mike (Butler), her obnoxious TV star, knows men only want one thing. Determined to prove that she’s not romantically challenged, Abby takes Mike’s advice during a promising new romance, but the unexpected results will stun everyone.

Much of the film’s success is due to the wonderful onscreen chemistry between Katherine Heigl and Gerard Butler. They continuously make us laugh, yet the comedy is not so broad that you can’t believe them in their roles. They make a point of interacting with one another, not as comic relief but as real people. Heigl plays Abby Richter, the romantically challenged, neurotic, controlling producer of a failing Sacramento morning talk show. Butler plays Mike Chadaway, the chauvinistic host of a public access relationship program called “The Ugly Truth.” He’s unapologetically tell-it-like-it-is in matters of men and women. There’s no such thing, he claims, as a sensitive, nurturing man who wants to connect at an emotional level. Men just want sex, plain and simple. And they only want it with attractive women.

Abby, who thinks Mike’s rhetoric is appalling, is horrified when she learns that he has been hired to her station in an effort to boost ratings. They clash at every turn … until he learns that she’s interested in dating her next door neighbor–an orthopedic surgeon named Colin (Eric Winter) who just happens to be incredibly handsome. Sensing she’s doing everything wrong to initiate a relationship, Mike offers to help Abby by having her test his relationships theories on Colin. She reluctantly agrees, and sure enough, Mike’s methods work wonders. She dresses more provocatively. She learns to stop being critical and avoid discussing her personal problems. She learns to be the embodiment of both the saint and the sinner, or as Mike puts it, “The librarian and the stripper.”

And that’s when things start to get more complex. Abby is succeeding with Colin, but only at the expense of not being herself. On the other hand, could anyone love her as herself? She is, after all, known for bringing background checks and printed topics of conversation to blind dates. As for Mike, he has very definite reasons for believing that loving relationships are a sham. They’re gradually revealed not only through carefully structured scenes, but also through Butler, who shows he can find the right balance between smug and sensitive. We see that Mike is the closest thing his young nephew has for a father, and even though he playfully gives the boy relationship advice, he’s also quick to remind him that kids should never, ever watch his show.
Movie Quality: 8/10

The print is presented in 1080p/AVC MPEG-4 with a 2.40:1 aspect ratio. This is one of those films that will make you a Blu-ray adopter. From the colors to the details, your jaw will drop if you look for some of the superb details. Colors are vibrant providing an excellent looking picture. Flesh tones are natural and accurate looking. Blacks look inky. Details are where this film shines the most with the camera even panning away in many scenes. Not once did I feel like I was at a loss for details making this a very strong presentation.
Video Quality: 9/10

The audio is presented in DTS-HD MA lossless 5.1 mix. This is not a mix that will blow you away, but the rears do provide several moments of excellent sounding effects from the score. The score is very good and fits the film well. The dialogue is clean and clear through the center channel. This is a well balanced mix.
Audio Quality: 9/10