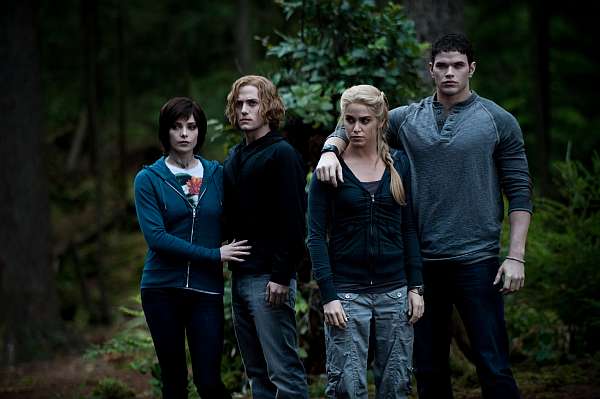 The third installment of Stephenie Meyer’s blockbuster vampire series is its most action packed, both in terms of fight scenes and human-vampire-werewolf lovin’. In Eclipse, the vampiric Cullen clan and the werewolves–their sworn enemies–unite against an army of “newborn” vampires, whose remnants of human blood in their veins makes them stronger and more uncontrollable, causing a string of murders in the Seattle area. They’ve been created by the vengeful vampire Victoria (Bryce Dallas Howard, taking over for Rachelle Lefevre), still keen on destroying human Bella (Kristen Stewart). Thus, Bella is under careful watch, and her undead love Edward (Robert Pattinson) and werewolf best friend Jacob (Taylor Lautner) spend a lot of time arguing over who is the better man for her. (In one hilarious scene where Bella’s freezing and only Jacob has the lupine body heat to warm her, he looks over at Edward and cracks, “I am hotter than you.” Go Team Jacob!) But there’s more at the heart of the triangle than love: Bella, against Edward’s warnings, doesn’t want to grow older than him and would willingly give up contact with her parents, the chance to grow old with children, and more to be turned into a bloodthirsty vampire. (Jacob’s trump card is that Bella wouldn’t have to give up her mortality to be with him.) But the unfolding of this love triangle is even clumsier than it was on the page; you’re never really convinced Bella has romantic feelings for Jacob, even during their climactic kiss on top of the mountain. This is likely to confuse non-readers of the book series, as Stewart emotes nothing that intones there’s a real competition here (clearly, she’s Team Edward). 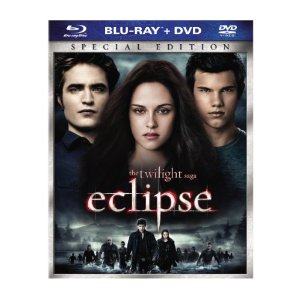 In the last two films, none of that mattered, so why should it matter in this the third and in my opinion the most likable of the trilogy so far? Fans desire only to see their beloved characters brought to life on the screen. “Eclipse” does just that. Any criticisms regarding the senselessness of the storyline or the futile confusion of a girl that has already made her decision two books ago should be taken up with Meyer, not the director or screenwriter of any of the films.

The creation of an entertaining and faithful adaptation that enables teenage girls to swoon, scream and choose sides at the sight of the film’s two hunky albeit warring leads, become better acquainted with the good vampire clan of “vegetarian” bloodsuckers, understand some of the characters’ personal histories, delve into the native Indian lore of the Quileute tribe while presenting the typical boy-girl-boy triangle with a supernatural twist, requires some storytelling skills especially in a two-hour time frame that includes the additional nemesis of a marauding newbie vampire army as the ultimate plot driver. Slade handles all this well, managing his youthful cast with a tastefully chaste sympathy that adds a little heat, but not enough to get accompanying parents enraged by what could have been another of the usual messages of no-holes-barred excess that Hollywood delivers without a thought to delicate and burgeoning psyches.

True to Meyer’s pro-abstinence sensibilities, Slade plays off the `fire and ice’ motif (presented as a metaphor by Bella’s introductory recital of Robert Frost’s poem of the same name for the opposing natures of her two leading young men) juxtaposing Bella (wholesomely perfect Kristen Stewart) between the forever absolutes of male over-protectiveness–the icy courteous albeit bloodsucking Edward (the weed-whacker haired Rob Pattinson) and the fiery angry self-possessed Jacob (the deliciously shirtless Taylor Lautner). The audience can feel Bella’s development from an uncomfortably undefined young woman to someone with the potential capability to face her own wakening desires without self-delusion or compromise. In this sense, “Eclipse” depicts teenage decisions with an age appropriate amount of confusion and wonder that seems generally gauged for this tale of Bella and the Beasts.

In addition to just the right amount of sensitivity with regard to the normally arising questions about just how far an actual teenage relationship should go, “Eclipse” tackles the larger question of choosing one’s own destiny–does Bella want a human life with Jacob or supernatural eternity with Edward? Does her natural awkwardness transcend into a sense that the mainstream obviously just isn’t in the cards for her? Bella is given the opportunity to explore this breaking aspect of self awareness in different scenes with different players: father, mother, fellow graduates, the wolf clan that wants her to stay human and the vampire fusion that understands her desire to fuse. Whether or not any of this actually works or not isn’t the fault of Slade or screenwriter Melissa Rosenberg. Again, any problems with the sometimes dimensionless dialogue between the players–especially the lines meant to convey jealousy and competition between wolf and undead–can be blamed on the circuitous adolescent whining conveyed in the original text by Stephanie Meyer.

The paradox for Slade or any other director chosen to do the next book in the series then becomes, “Should he?” or “Shouldn’t he?” with regard to plumping up the thin material with some background flashback that will make the characters and their current level of desire for life, for love, for family and friends more understandable. He “should” but does he want to be attacked by legions of fundamentalist fans for interjecting impurity to their beloved books?

Kristen Stewart and Rob Pattinson work the material to the best of their abilities this time; their respective characters flow together with slightly more familiarity. However the melancholy tone still prevails–with all that danger aloft, how could it not? The basic chemical bonding between the two still seems to need a formula adjustment. Imagine Bella kissing and wanting to get close to a guy whose temperature stays in a steady arctic zone fit for a damp seal or frosty polar bear. That might work in the tropics, but in the wet Northwest? In the same respect, I don’t understand why a 21st century girl with Bella’s experience or sensibilities would want someone tracking her as if she were Big Foot each and every time she decided to go for a ride in her truck.

Technically, the computer-generated wolf colossus look and seem real enough to want to snuggle against. Who wouldn’t want one of those impressive mega-pets watching the old homestead? Parents need not be disturbed by any notion of excess gore; the action sequences of fast-moving cart-wheeling vampire martial arts works without any shredding of flesh with the usual blood fest associated with a battle involving just one hemoglobin slurper.
Movie Content: 8.5/10

The print is presented in 1080p/AVC MPEG-4 with a 2.40:1 aspect ratio. The tradition continues with each next chapter of “The Twilight Saga” in high definition on Blu-ray. “Eclipse” has the better image quality over the previous two films in the series and to the point where you feel like your looking through glass. The muted color palette returns again with whites and grays being strong, but a bit more color has been thrown into the mix. Blacks are as deep as ever. Details are well done and show some of the finer details of the computer generated behemoth wolves. I still felt like the atmospheric portion of the film still makes you feel like you are a part of this fantasy world.
Video Quality: 9.5/10

The audio is presented in DTS-HD MA lossless 5.1 mix. The audio mix is well done and feels as we are a part of the . The problem with the first film was that the mix was on the low end for the first half of the film. Dialogue through the center channel carried more of a punch sounding clearer. Sound effects come pouring into the soundfield provide a dynamic experience. I continue to reference to the first film on Blu-ray, but that one was much more front heavy of an experience. Things have changed here as the sound design did take advantage of the surrounds. Fans will not be upset in any way here with the audio.
Audio Quality: 9.5/10

“The Twilight Saga: Eclipse” will almost certainly please the fans, just as they were pleased twice before. Non fans will have a rougher time of it, although I suspect it will be easier to win them over with this film than it was with the first two. As for myself, I recognize its progress as the third chapter of a series, but it’s still too slow, too overwrought, and too didactic for me to recommend it.
Overall Rating: 8/10