For those that caught the first season of ‘The Tudors’ will remember all of the panning by critics. Newcomers to the show will ask as to why was this show panned quite harshly in its first season. The shows portrayal of Henry VIII was stretched out beyond the truth adding in elements that were not factual. It comes as no surprise to those that are historians or just in general know enough about Henry VIII that fabricating certain parts of the story just does not bode over too well. While the television series loses a bit of its luster from a historical aspect, it makes up for it through the entertaining first season.

While the first season was panned critically, writer Michael Hirst takes a bit of a different direction with the second season. He takes a few pieces that were disliked and totally removes them from the shows premise. Though the fiction is still there in the stories, some of the tones have been removed. With each passing season, we learn about each one of Henry’s wives as Hirst has built this show around this idea. Each season will focus on Henry’s relationship with his wife of that time period. The show is supposed to last through a six season run.

Then there is also politics that are a part of the show for those that are not too familiar with Henry VIII (Jonathan Rhys Meyers). This is one area where the show does excel very well especially in the first season with his attempt to produce a male heir with his first wife Catherine of Aragon. That ends up leading into the history behind the split of the Catholic Church. Factual events like the split of the church and Henry VIII trying to produce a male heir are going to make some happy.

In the second season we do spend a lot of time with Henry trying to build a relationship with Anne Boleyn (Natalie Dormer) and ultimately marrying her. We have a young girl in Anne Boleyn that tries hard to win the heart of the king and makes the Boleyn family even appear as if they are pushing their daughter hard to become the Queen. It makes the Boleyn family look horrible with this interpretation. There is an even bigger problem when Anne can only produce girls, not being able to give Henry the boy that he wants.

This is a decent show with some very good acting. I enjoy time period pieces like ‘The Tudors’ a lot, considering that I have viewed many films with Kiera Knightly starring in these kinds of films over the last few years. Jonathan Rhys Meyers does an excellent job as King Henry VIII, except he does come off as too young for the role. That is one area where I do wish they would have made him look a tad bit older or maybe recasting the role could have really changed the elements of the show for the better. He nails down Henry’s desperation to produce a male heir to the tee though with his facial expressions and actions. Natalie Dormer also does a great job with her role. She is a fresh breath of air over Maria Doyle Kennedy’s portrayal of Henry’s first wife, Catherine of Aragon in the first season.
Movie Content: 4/5 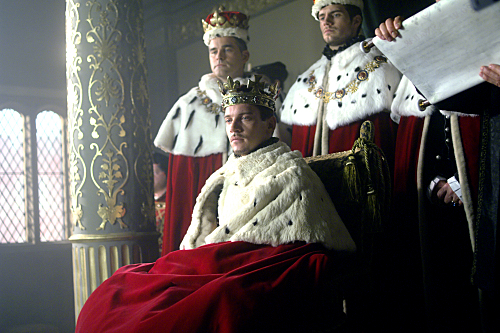 The print is presented in 1.78:1 anamorphic widescreen aspect ratio. Colors are rich looking with a softer looking image. Flesh tones are natural and accurate. The sets and costumes do really come to life making this one of the more beautiful looking television shows set during a specific time period.
Video Quality: 4/5

The audio is presented in Dolby Digital 5.1 and Dolby Digital 2.0 mixes. I did enjoy the DD5.1 mix for this show. As a good number of shows that are dialogue driven, there is not too much going on in the soundfield. The rears do get some action throughout with the score of the show. You do get some nice ambient effects in the soundfield that surprised me a tad bit. Dialogue is clear and effective through the center channel.
Audio Quality: 3.5/5 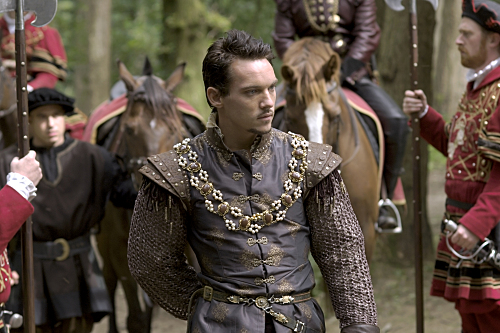 ‘The Tudors’ season two is much more enjoyable than the first season as it does tone a few elements down. If you are the kind of person that doesn’t mind fiction introduced into history, you will enjoy ‘The Tudors’ a lot. I would recommend this a rental since it is the kind of show that could turn people off due to its tones.
Overall Rating: 4/5 (Purchase for fans, Rental for others)

For fans of the show, Showtime is offering a special site link: www.whothetudorareyou.com