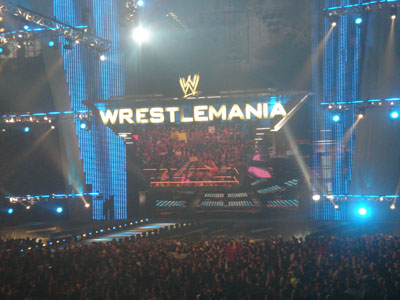 It is the most anticipated yearly event in Sports Entertainment, an annual pop culture touch point. For more than 25 years, WrestleMania has hosted the biggest matches, the biggest stars, and the biggest celebrities. Now for the first time ever, the story of WrestleMania is told from its early beginnings through the week-long spectacular it has become, routinely drawing fans from all 50 states and around the world. This documentary feature includes new and insightful interviews from the superstars and creative forces behind the event. 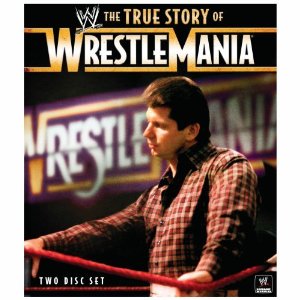 The True Story of WrestleMania has been one of the most anticipated releases for the first quarter of the new year. While I enjoyed the Main Feature on Disc 1 (Running Time 2hrs1min12sec) after all is said and done we still don;t have a definitive look at WrestleMania. Things start off really good discussing the territories and a young, aggressive Vince McMahon wanting to expand his fathers company into the mainstream of America. I & II are discussed in great detail and even has insight from the Warner Theater owner that was one of the participating theaters to show via closed captioning the early WrestleManias. They really put over Hulk Hogan and it was nice to see them show their appreciation and realize that from the very first stages that the biggest event of the year would not have lasted without Hulk or vice versa. The documentary runs in linear fashion from I-III but then flips to XXIII to discuss Donald Trumps involvement in the Hair vs. Hair Match then goes back into IV and V hailing from Trump at Atlantic City. From that point on things run non linear which hurts the presentation overall.

What is one of the most glaring flaws is the complete glossing over several years of shows with nary a discussion of the matches that I’m sure fans would have appreciated more insight and feelings. Make no mistake this is the WWE version of history as they still insist that III held 93,173 patrons and VII was moved to a smaller venue due to security concerns during the Iraq war, when it was really because of poor ticket sales and waning interest. They are quite frank though with the fact that the preview matches at house shows between Hulk Hogan and Ric Flair just weren’t catching on with fans after years of build up and that was the main reason for making two main events at VIII, with “Macho Man” Randy Savage taking Hogans spot against Flair.

The absolute highlight is an all too brief fly on the wall look at WrestleMania IX including a dancing Vince at the Gorilla position when Shawn Michaels heads out for his match. It is a candid peek behind the curtain for what is regarded among the worst WrestleManias ever. There are quick little clips of behind the scenes footage from other years but usually there is no audio as there is narration or an interviewee speaking. There are interview segments from Vince McMahon, Hulk Hogan, HHH, John Cena, Shawn Michaels, Sheamus, The Big Show, Ricky “The Dragon: Steamboat, “Stone Cold” Steve Austin, Gene Okerlund, Stu Staks – Pro Wreslting Illustrated Publisher, Jerry “The King” Lawlwer, The Rock, William “Refrigerator” Perry, Dick Ebersol, Howard Finkel, Jerry Brisco, Donald Trump, Sgt. Slaughter, and “The Million Dollar Man” Ted Dibiase. I would say this is a definite recommend to fans still but just go in not expecting an extremely open look that we were hoping for.

The print is presented in 1080p/AVC MPEG-4 with a 1:78:1 aspect ratio. The main feature includes newly shot interview segments that are interspersed with a ton of vintage footage that has been stretched to fill the screen. Despite not using original aspect for the 80’s and 90’s footage the quality is still very good. The new and recent scenes are abound with crisp, bold colors and strong black levels. Detail was good on clothing textures and close up shots of the rings or crowd. Vintage footage was a little soft in some spots but was always pleasing with nice color saturation coming from some of the more colorful individuals and style choices of those days.
Print Quality: 9/10

It would’ve been better served as the story of the first ten (maybe even five) WrestleManias, too, as trying to cram commentary on twenty five different events resulted in a monotonous pace and forced ignorance of several legendary moments in the show’s dazzling history.
Overall Rating: 8.5/10