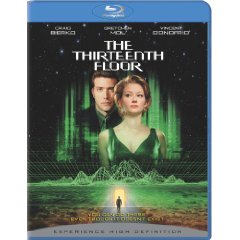 The barriers that separate fantasy from reality are shattered in this stylish, mind-jarring thriller, where two parallel worlds collide in a paroxysm of deception, madness and murder. On the thirteenth floor of a corporate tower, high-tech visionary Douglas Hall (Craig Bierko, The Long Kiss Goodnight) and his high-strung colleague, Whitney (Vincent D’Onofrio, Men In Black), have opened the door to an amazing virtual world – circa 1937 Los Angeles. But when the powerful leader of their secret project (Armin Mueller-Stahl, Shine, The X-Files) is discovered slashed to death, Hall himself becomesthe prime suspect. Arriving from Paris is the beautiful and mysterious Jane Fuller (Gretchen Mol, Rounders), claiming to be the murder victim’s daughter. Her instant, magnetic attraction to Hall onlyfurther blurs the lines of what is real. Is he the killer? Is the inscrutable Jane somehow connected? To find the answers, Hall must cross the boundaries into the simulated reality he has helped create – and confront the astonishing truth about his own existence..

It starts as a typical VR story. What is different about this movie is that it actually simplifies the situation by giving a solution to it. In order to provide a sort of reasonable climax that isn’t just throwing everything into the wind and saying,

The film is nothing but flat acting holding up a slightly misappropriated pace centers around a story that seemed to struggle, really struggle to find a way to fit in at least a little violence and a love story. A few blatant plot-holes coincide with a hidden enemy whose motivations are incredibly contrived and forced. This film doesn’t feel or work as well as it should, and it seems utterly removed from the spectators, almost as if it’s so caught in its own world that it doesn’t really care about being a story, it just cares about getting the job done.
Movie Content: 6/10

The print is presented in 1080p/AVC MPEG-4 with a 2.40:1 aspect ratio. The image is inconsistent throughout the film. The image is colorful helping out the image tremendously as the original film colors were muted. Black levels are deep. Grain is present, which can be subtle and spikes up in other scenes. The print has been cleaned up for the most part, with only a few scenes carrying a few specs of dirt. Details are also very well apparent.
Print Quality: 7/10

The audio is presented in Dolby TrueHD 5.1 mix. his is not an overly aggressive sound mix. Dialogue is centered properly through the center channel providing a nice deep clarity. During dialogue driven films, this is very important on the depth. There are some decent dynamics with the effects which make you feel like you’re in the middle of the scene. This is a decent track, but not what I expected from this film.
Audio Quality: 7/10

Being the third time that I have seen ‘The Thirteenth Floor’, I still could not find the film on the same level as ‘The Matrix’ which many comparisons have been made too. I was more disappointed with the video and audio on Blu-ray as it wasn’t as strong as a few other Sony catalog titles that I have viewed on the format. If you are a fan of the film this is an upgrade over the previous DVD release, but not by much.
Overall Rating: 9/10