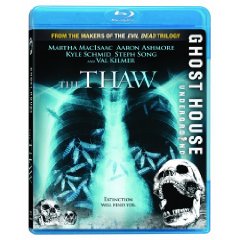 The Ghost House Underground line of direct-to-DVD releases continues for a second year, only this time around we only get four films compared to last year’s eight. The most notable of which is The Thaw, which boasts some pretty decent production values and some chilling scares as well. Martha MacIsaac (Superbad and The Last House on the Left) stars as the daughter of an environmental scientist (Val Kilmer) who accompanies a small group of students to a remote location where her father has discovered a well-preserved frozen woolly mammoth, and the parasitic bugs that lay dormant inside it as well. Naturally, it isn’t long before said bugs are on the loose and spreading. Packed with gross-out moments and some brief shots of gorgeous cinematography, The Thaw is surprisingly good and definitely creepy. It doesn’t offer anything you haven’t seen before in any random horror film, but for what it’s worth, ‘The Thaw’ is worth a look.

This movie was quite a satisfying as it really ties in being isolated, with hints of paranoia, gore, and suspense to pull in the viewer. It’s not a classic but it is very well done and should meet viewers’ expectations. Comparisons will be made to John Carpenter’s ‘The Thing’ even though the ‘The Thaw’ has a very similar beginning. The movie plays out differently than ‘The Thing’ and some of the sequences are truly unnerving in their own right. Val Kilmer is great as the obsessed scientist but he isn’t in the movie very much, however this isn’t a hinderance to the movie because the rest of the cast is quite capable themselves.
Movie Quality: 8/10

The print is presented in 1080p/AVC MPEG-4 with a 1.78:1 aspect ratio. This is not the most consistent presentation on Blu-ray with colors at times being all over the place and then the issue with grain. Some scenes are consistent with the grain, then the grain gets very heavy at times to the point where it takes center stage. Colors appear to be strong with no apparent issues. Blacks were also deep. Then jumping back to a few problems, details become an issue as they are not strong by any means. There were some scenes where details were good, but more often than not there was a loss of details. Then add some rather poor CGI due to the low budget.
Video Quality: 5/10

The audio is presented in DTS-HD MA lossless 5.1 mix. There is a lot more dialogue in this film than a bombastic audio mix which is not a bad thing since atmosphere is key in this film. I felt much immersed from the start of the film all the way to the end. Dialogue was clear through the center channel providing excellent depth.
Audio Quality: 7/10

Overall it was exactly the kind of movie I was expecting. Not a classic but rather entertaining. The image on Blu-ray is all over the place which is not what I had expected, while the audio is just right for this kind of film. The special features are really on the light side which could be good for most and bad for fans of special features. This is yet another Ghosthouse Pictures film that I recommend from the 2009 batch of new releases.
Overall Rating: 7/10