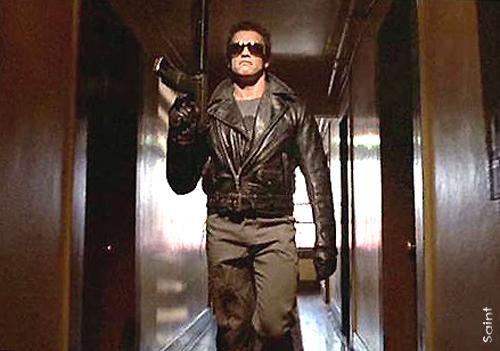 This is the film that cemented Schwarzenegger’s spot in the action-brawn firmament, and it was well deserved. He’s chilling as the futuristic cyborg who kills without fear, without love, without mercy. James Cameron’s story and direction are pared to the bone and all the more creepy. But don’t overlook the contributions of Linda Hamilton, who more than holds her own as the Terminator’s would-be victim, Sarah Connor–thus creating, along with Sigourney Weaver in Alien, a new generation of rugged, clear-thinking female action stars. It’s surprising how well this film holds up, and how its minimalist, malevolent violence is actually way scarier than that of its far more expensive, more effects-laden sequel. 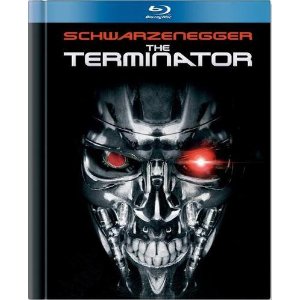 The movie had me gripped from the eerie opening scene of Los Angeles in 2029: very bleak, dark, life-less, desolate, nothing moving except these huge menacing machines. And as they scourge the land, a message appears: The machines rose from the ashes of nuclear war. For years they had tried to eliminate the few remaining humans resisting them, but the final battle would not be fought in the future, it would be fought here in the present.

With that cryptic message, the heart-pounding music begins and one of the most awesome opening title sequences starts and “The Terminator” is underway. Few movies have the audacity and confidence in their audience to reveal their plots as gradually as The Terminator. Unless you’ve seen one of the other Terminator movies you won’t fully understand the plot until half-way through. It’s a movie that’s got it all: action, horror, a love story, and, above all, old school science fiction. It features Arnold Schwartzenegger in his most famous role, as the most merciless cybernetic organism to ever grace the silver screen (even more merciless than Darth Vader!). And you would have to be a machine to not be moved by the ending.

Writer/director James Cameron did an excellent job of creating a visually thrilling science fiction experience with a significantly smaller budget than anything produced in movies or television today, and yet still his visuals hold up better than most from that time. That is as much to do with the excellent work on behalf of James Cameron and his crew as it is with the talented people working with Stan Winston to create the stunning, yet sometimes frightening images of a future where machines rule over the humans with an iron fist. Granted there are moments within the film where it definitely shows its age, and the practical and visual effects definitely look dated; however, given the time at which the film was made the results are still impressive even by today’s standards if you really stop to think about it. It would be nice (and I’m sure purists will disagree with me on this) if some of the weaker moments in the visual effects area could be tweaked/redone similar to what George Lucas did to his original Star Wars trilogy. I’m not saying to tweak the effects to the extent that George did, but there are definitely places where if an improvement could be made the movie would definitely benefit from it, and would feel more in line with the technological advancements made in between this first movie and its sequels.
Movie Quality: 9.5/10

The print is presented in 1080p/AVC MPEG-2 with a 1:85:1 aspect ratio. I was left underwhelmed in 2006 with the initial release of this film on Blu-ray and even more here in 2011. One of the big issues with the print is the white specs, dirt, and some damage throughout. This is still better than all the previous DVD releases, but I am disappointed that we did not get a new transfer here cleaning up some of the issues. Hopefully the next time this film is released on Blu-ray we will get a nice transfer with it too.
Print Quality: 6/10

The audio is presented in a LPCM 5.1 mix. The audio is recycled from the previous Blu-ray release. I think all the explosions sounded good with clear deep bass. All the shot outs in the present time sounded good in my opinion. The bass from the weapons was surprisingly loud and clear. When a Terminator in a flashback scene starts firing with his minigun like weapon, i think it sounded too low and lacked bass. Dialogue was clear through the center channel with no issues.
Print Quality: 6/10

Overall, “The Terminator” is an excellent science fiction thrill ride that grabs you early on, and only occasionally slows down long enough for you to catch your breath before quickly rushing forward once more. With an outstanding story, a surprising cast, and mostly solid visual effects work, this is a movie that kicked off one of the greatest sci-fi movie series’ of all time, and should definitely be on everyone’s must see list!
Overall Rating: 6/10