The Taking of Pelham 123 Blu-ray Review 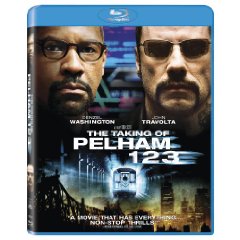 John Godey’s 1973 novel The Taking of Pelham One Two Three boasts a suspense situation so surefire that even the directorial bad habits of Tony Scott can’t ruin this latest movie version. Four armed men seize a New York City subway train, isolate one car, and threaten to start killing passengers if a ransom isn’t paid within the hour. The ransom was a million dollars in the book and also in Joseph Sargent’s solid 1974 movie, in which Robert Shaw played the mercenary leading the hostage takers and Walter Matthau was the growling transit cop trying to outsmart him. In 2009, the title has gone digital–The Taking of Pelham 123–and inflation has jumped the asking price to $10 million. Where Shaw’s menace was steely, John Travolta opts for manic, and shamelessly has a blast in the master villain role. His adversary, cagily underplayed by Denzel Washington, has been upgraded in civil-service rank but also demoted on suspicion of taking a bribe. This colors the dynamics of the dialogue between Washington at his control-center console and Travolta on the motorman’s microphone aboard the stalled train.

Though Scott’s uniquely frenetic editing has been toned down from his previous films, his unmistakable style still frequents the action and accentuates the tension-filled premise. Denzel Washington’s quick-witted and moderately corrupt dispatcher plays off of John Travolta’s Wall Street savvy sociopath with plenty of clever exchanges, and the dark humor and suspense that find its way into the bloodshed culminates in an engaging game of cat and mouse. Not quite as slick as the original, and perhaps a little too conspicuous in its efforts at exuding cool, this latest take on the subway heist story still accomplishes entertainment at break-neck speed.

When a New York City subway train is hijacked, Rail Control Center dispatcher Walter Garber (Denzel Washington) becomes an unwitting negotiator for the ruthless criminals aboard. Led by the uncontainable Ryder (John Travolta), the hijackers demand ten million dollars in exchange for the seventeen hostages and offer only one hour to deliver the ransom. As minutes quickly count down, Garber must utilize his cunning and resourcefulness to buy time and catch the mercenary off guard as the situation goes from bad to catastrophic.

Most audiences will not know that The Taking of Pelham 123 is based on a John Godey novel, or that it’s been adapted into a movie twice before with the same name. While Scott’s version stands on its own as a big-budget action movie, the purpose of specifically remaking this story is puzzling. Shouldn’t the reasoning behind the revisiting of a popular plot be to improve upon some outstanding aspect? The use of the internet, cell phones, snipers, bloodshed, crude language and more give this new vision a sparklingly modernized feel, but when the movie draws to a close, it just can’t compete with the 1974 version. Washington and Travolta have an intriguing chemistry, but even that can’t outdo the cat-and-mouse mindgames between Walter Matthau and Robert Shaw, who played their counterparts in the first feature adaptation. Perhaps a title change could have appropriately distanced Scott’s take from being endlessly compared to an infinitely superior film..
Movie Quality: 8.5/10

The print is presented in 1080p/AVC MPEG-4 with a 1.78:1 aspect ratio. Color is vibrant and bold in this transfer. A very good example of that is the color red, when blood splats on the floors, walls, and in the air. The film is so colorful that it is very good in details. There are also moments though where the transfer does lack in a few areas.
Video Quality: 9/10

The audio is presented in DTS-HD MA lossless 5.1 mix. The soundfield is immersive at all times no matter if it is the special effects or dialogue. I was literally amazed with the amount of bullets panning from each speaker in the rears. It sounded as if there were bullets ricocheting off of the walls in the room. Bass was punchy as it shows with the amount of gunfire and explosions. Dialogue is also well placed in the center channel sounding crisp and clear. The best part of this all around aggressive soundtrack is that it is well balanced between the dialogue and sound effects.
Audio Quality: 9/10

This is a good action thriller that keeps you thinking and on the edge of your seat. Both Travolta and Washington are entertaining in their roles which will make fans of both happy. On Blu-ray this package offers strong video, audio, and special features. This is well worth a rental unless you are a huge fan of Travolta, Washington, and Scott, then this is must own.
Overall Rating: 8.5/10