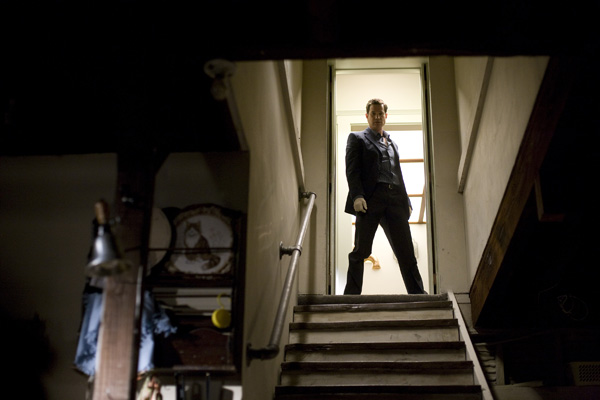 The Stepfather is one of those movies that telegraphs its ending almost as soon as it starts; so, since we already know the destination, the only question involves whether or not we’ll enjoy the journey. When we meet the guy who calls himself David Harris (Dylan Walsh, Dr. Sean McNamara in the Nip/Tuck TV series) during the opening credits, he’s stepping over the bodies of the wife and kids he’s just murdered, out the door and on his way to a new life. All that remains is to see how the tale will play itself out, and while McCormick supplies a few scary moments, he leaves no cliché unexplored (including Charlie Clouser’s ominous, obvious music) on the way to the expected violent climax. In the end, one can only wonder why someone thought remaking The Stepfather was a good idea; the 1987 original offered both a much better explanation for the killer’s motives and a significantly more compelling performance by Terry O’Quinn in the lead role. 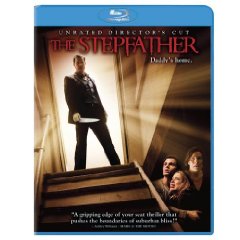 This remake of the exceptional 1987 independent film lacks the suspense and character development of the original. Dylan Walsh delivers a good performance playing the title character, but his portrayal is not as nuanced as Terry O’Quinn from the original who would murder his step family because they could not live up to his idealized notion of the American family. The original was as much a metaphor for the superficiality of the American dream as it was a superb character study of a psychopath who managed to evoke sympathy. Walsh, on the other hand, is a fairly one dimensional villain. He kills not because his family disappoints him but because they are suspicious. They are no different than any one of his victims.

The film also differs much from the original by not only changing the daughter into a son, but also by having the son carry the film. There is really no mystery or suspense since Badgley is convinced by his mother and girlfriend that his potential stepfather is just dealing with the grief of losing his other family in unusual ways. It is at this point where the film drags with only a few kills to break up the monotony. O’Quinn was far scarier throwing a tantrum than Walsh is sneaking up on little old ladies.

At times, the film feels like a generic slasher since it ups the body count from the original. However, these victims serve little purpose other than proving how they are more intelligent than the main characters. This fact doesn’t save them unfortunately. The film manages to achieve some moderate thrills in the final act, but the effect is cheapened by an unnecessary and implausible ending that hints at a sequel.
Movie Content: 7/10

The print is presented in 1080p/AVC MPEG-4 with a 2.40:1 aspect ratio. For a film that has man dark scenes, the video transfer is stunning.  Colors are vibrant throughout the film. Blacks are deep and a pure test of this is with the darker scenes in the film. The print looks clean and pristine from any apparent issues. Details are excellent in scenes that are close-up and panned away.
Video Quality: 9/10

The audio is presented in DTS-HD MA lossless 5.1 mix. This is a very atmospheric and immersive sounding film. The rears provide quite a few times where sound effects panned across the speakers. There are many scenes that are outside which also take advantage of the soundfield providing some dynamic sound. Dialogue is clean through the center sounding ever so crisp.
Audio Quality: 9/5

I advise anyone interested in this film to watch the original before watching this. It is a well done psychological thriller with dark humor thrown in. This film, although fine for a rainy afternoon, is an ultimately forgettable movie that unfortunately wastes a fine cast.
Overall Rating: 7/10