Moments of startling beauty punctuate the comic-book action flick The Spirit, written and directed by Frank Miller, the legendary writer/artist behind the reinventions of superheroes like Daredevil and Batman and the creator of the comic books of Sin City and 300. The Spirit (Gabriel Macht, Because I Said So)–once a beat cop named Denny Colt, now a resilient masked crime-fighter who returned from the dead–tangles with his nemesis, the Octopus (Samuel L. Jackson), and a slew of slinky dames along the way (played by Scarlett Johansson, Paz Vega, Jaime King, and more). But the real struggle is the Spirit being pulled between the girl he loved once (Eva Mendes) and the girl he loves now (Sarah Paulson, Down With Love). Miller applies his trademarked hyperbolic tough-guy approach–a perverse mixture of ultraviolence and melodramatic sentimentality–to the whimsical 1940s detective hero created by Will Eisner. Unfortunately, the combination is unlikely to satisfy fans of either artist; The Spirit is a mishmash of cliches and half-baked plots, plucking threads from several of Eisner’s puckish tales but never reweaving them into a satisfying new story. The actresses provide plenty of eye-candy but little substance, while Macht is just bland. But Miller has an undeniable eye; the movie, with its exaggerated artificial visual style, is littered with images that dazzle and ravish.

Some of the issues that I had with this film has to do with the fact that I didn’t care what happened to any of the characters.  The style of the dialogue of the film is what ended up hurting it more in the end. It just felt that much of the dialogue was way too forced. Then it didn’t help with a script that was also lacking. I have never read the comic books that the film is based off of, but I have read enough to understand the mythos and this script just didn’t engage me.

Samuel L. Jackson in the role of The Octopus is not bad, but this is not the Sam Jackson we are used to that is dynamic. He looked to have fun playing this role but something felt missing from his performance. I never felt like there was this huge element of danger which would take away any sense of suspense from a film of this caliber. Gabriel Macht as The Spirit works albeit the script lacking. Macht really did a well job through his mannerisms and dialogue presentation to make his character standout well against the caliber of Samuel Jackson, Scarlett Johannson, and Eva Mendez. I found that Eva Mendez stole the show here in ‘The Spirit’. She is a beautiful woman, but the style of the film really brought out her beauty making her a sexy vixen. While I may have been harsh on the story of the film, the performances gel together.
Movie Content: 7/10

The print is presented in 1080p/AVC MPEG-4 with a 2.35:1 aspect ratio. WOW! is all I can say with this transfer as it is total reference quality material. Colors like reds and whites pop off the screen due to some excellent black levels which offer unrivaled depth. The black levels are the best that I have seen for a film yet in high definition even giving ‘Sin City’  a run for its money. Another advantage of the depth for the black levels is that they really bring out the characters. Eva Mendez benefits the most looking absolutely stunning. Flesh tones are natural and accurate looking. The image is prisintine with no print issues and like looking through a picture window. I was impressed by the video quality and this will be the new standard that other studios will try to upstage.
Print Quality: 10/10

The audio is presented in DTS-HD MA lossless 5.1 mix. At times films have excellent video, but are lacking in the audio department or vice versa. ‘The Spirit’ also has reference quality audio to match the excellent video. I was in awe from start to finish with such audio bliss to my ears. This is one dynamic audio mix that makes you feel as a part of the action from start to finish. Even the most discrete sounds were pouring through the rears. Sound effects like bullets zipping, gun fire panned from speaker to speaker. The score was also well implemented into the mix to add to the atmosphere of the film. Dialogue came through the center channel clean with no apparent issues. This is yet another excellent audio presentation from Lionsgate.
Audio Quality: 10/10 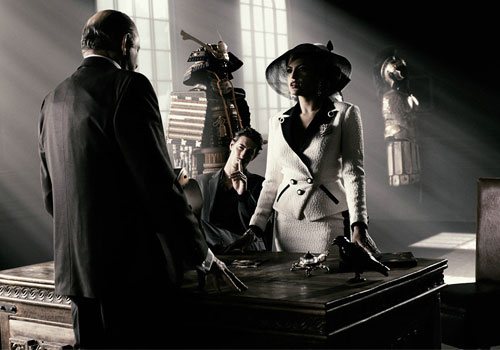 While ‘The Spirit’ sounds and looks like demo worthy material on Blu-ray, the film just comes off rather shallow just trudging from scene to scene. I didn’t feel any real connection to the characters as they lacked a sense of depth and even Samuel Jackson that can turn horrible movies to something enjoyable felt a bit off to me. If interested I would give this a rental and if you are a fan of the film than you will be happy with this demo worthy release.
Overall Rating: 8.5/10