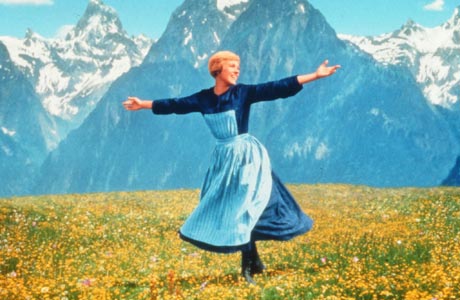 When Julie Andrews sang “The hills are alive with the sound of music” from an Austrian mountaintop in 1965, the most beloved movie musical was born. To be sure, the adaptation of Richard Rodgers and Oscar Hammerstein II’s Broadway hit has never been as universally acclaimed as, say, Singin’ in the Rain. Critics argue that the songs are saccharine (even the songwriters regretted the line “To sing through the night like a lark who is learning to pray”) and that the characters and plot lack the complexity that could make them more interesting. It’s not hard to know whom to root for when your choice is between cute kids and Nazis. It doesn’t matter. Audiences fell in love with the struggling novice Maria (Andrews), the dashing Captain von Trapp (Christopher Plummer), and, yes, the cute kids, all based on a real-life World War II Austrian family. Such songs as “My Favorite Things,” “Do Re Mi,” “Climb Every Mountain,” and the title tune became part of the 20th century Zeitgeist. In addition, The Sound of Music officially became a cult hit when audiences in London began giving it the Rocky Horror Picture Show treatment, attending showings dressed as their favorite characters and delivering choreographed comments and gestures along with the movie. 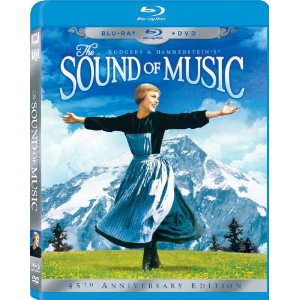 “The Sound of Music”, the 1965 20th Century Fox musical which would capture the world with its memorable music and it’s touching storyline and continues to have thrived through various generations and will continue to thrive for many generations hereafter.

The film is an adaptation of a popular Broadway play which is based on the memoir “The Story of the Trapp Family Singers” written by Maria von Trapp. The von Trapp family are known for escaping from the Nazis in Austria after the Anschluss (the annexation and occupation of Austria by Nazi Germany in 1938).

The original musical based on the book featured music by Richard Rodgers and lyrics by Oscar Hammerstein II (both Rodgers and Hammerstein were known for their music for “Oklahoma!”, “Carousel”, “State Fair”, “South Pacific”, “The King and I” to name a few) which led to the book by Howard Lindsay and Russel Crouse. The Broadway production began in 1959 starring Mary Martin and Theodore Bikel and would later inspire a film adaptation in 1965 which was loosely based on the Broadway production and memoir.

The film would become an ultimate success as director Robert Wise (known for “West Side Story” and “The Haunting”) would win five Academy Awards for Best Director, William Reynolds for Best Film Editing, Irwin Kostal for Best Music, Scoring of Music, Adaptation or Treatment, Best Picture and Best Sound.

The film would be best known for its wonderful location of Salzburg, Austria (which has inspired an actual “Sound of Music” tour which has been functional for the last 30-years) but most of all, known for its music which include “The Sound of Music”, “Edelweiss”, “My Favorite Things”, “Climb Ev’ry Mountain” and “Do-Re-Mi”.

The film which was budgeted at $8.2 million would go on to gross $163 million worldwide. The film would break the record held by “Gone with the Wind” for box office revenue and would also be a film that would be in circulation in theaters for three straight years.

The print is presented in 1080p/MPEG-4 with a 2.20:1 aspect ratio. “The Sound of Music: 45th Anniversary Edition” literally looks amazing. For those who have owned previous versions of the film on DVD, back in 2005, the film went through restoration using a backup negative of the original 70 mm print. At the time, the original 70mm 6-Track print was so damaged, there was no way to even use the original negative at that time and most of us who watched the 40th Anniversary Edition felt that the film looked absolutely beautiful compared to it’s earlier 2000 DVD release.

No longer is the film hazy, no longer is the film more on the pinkish side. “The Sound of Music: 45th Anniversary Edition” is vibrant. The grass…you can see the various grains of grass, the strands in green, yellow and detail of the mountains over looking Salzburg. I was amazed! Another example, Maria splashing the water before she heads to the von Trapps, you can see the water droplets flying in the air, another one is the von Trapp’s uncle and his coat, you can see the wool in his jacket. There is so much detail in this latest version of “The Sound of Music”, it’s incredible! I am literally speechless because I own previous versions of this film on video and never before have I seen this much clarity in the film ever!
Video Quality: 10/10

The audio mix is presented in DTS HD 7.1 Master Audio lossless track. The way this music was handled through the surround channels was amazing. The music and the instruments playing on individual channels was well done. The first thing that came to my mind during sequences of the sisters singing “Maria” to the wedding sequence, the sounds that were utilized through those channels were amazing. Also, they were able to isolate the sound of Salzburg up the hills, the sound of wind, the birds… I was in awe with the lossless soundtrack.

I absolutely love the soundtrack for this film and this is the best I have ever heard of it. If you have a 7.1 setup (center speaker, two fronts, two surrounds, two rear surrounds and your subwoofer), you will definitely be impressed with how alive the music comes as it really sounds beautiful via the soundscape in the home. Once again, I was in awe when I heard the music and I’m sure many people will be just as impressed by it.
Audio Quality: 9.5/10

Overall, this is a fantastic release of “The Sound of Music” and if you are a big fan, whether you get this version or the Limited Edition version, all I can say is that this is the definitive version to own that just stands out from its previous video releases in quality and quantity. Great music, great story, musical performances, cinematography and just a wonderful family film. Sure, it may be a bit too saccharine sweet for today’s audience (or too long) but for those who have never watched this film ever, please give it a try.
Overall Rating: 9/10