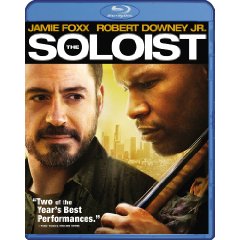 Sometimes people randomly cross paths, and forever will be changed. That’s the subtle, yet profound, message of The Soloist, a deeply moving and deeply human film about people and what, and whom, they connect with. Robert Downey Jr., who is effortlessly charismatic, plays Los Angeles Times columnist Steve Lopez, whose job it is to report on the character and characters, of Southern California. But even a (slightly) jaded reporter can be profoundly touched by a story he reports on, and then allows to unfold in real time. The subject of Lopez’s column is Nathaniel Ayers (Jamie Foxx, also in a stellar turn), a homeless street musician whose lovely music–played on a battered two-string violin–Lopez hears one day on a walk not far from the Times office. Lopez learns Ayers once attended Juilliard before mental illness sent him into a spiral, and the column detailing Ayers’ journey touches the community–as well as both men. The film (based on Lopez’s book, follows the halting journey of their friendship, and how sometimes people’s lives can’t be fixed. Director Joe Wright (Atonement) cast real homeless Angelenos in the many street and social services scenes, giving the film an even more heart-wrenching and realistic patina. If the film doesn’t always live up to its high aspirations (the trippy effects, which supposedly show what Ayers sees when he hears Beethoven, are straight out of a 1968 light show), it nonetheless has a big heart. And in an era in which newspapers are struggling to survive, it’s heartening to see a contemporary story about a newspaper that can still affect change.

Lopez happened to meet a homeless person, Nathaniel, playing violin in the street. He wanted to write a story about him. Nathaniel, though was having mental illness despite his ability to play violin efficiently. Lopez tracked his family down, which helped him to know more about Nathaniel’s past life.

When someone read about Nathaniel in the newspaper, it opened their heart with a feeling that they wanted to gift him with something. An old lady sent him a cello, which probably was one of her precious belongings. Nathaniel was very glad to have a new cello, which he was really mad about when he was young.

He played the cello among the homeless people in Los Angeles. He loved the simple kind of life which he was living and did not need anything which we consider GREAT things in this world. Neither he had a family nor a home but he was pretty much satisfied with what he had and what he was. He truly was one of the richest and satisfied person in the world if we look from the other side though he did not have any belongings except his cello and a few items which he used to carry them on his cart.

The story made very clear that you are a happy man if you are satisfied with what you are. It also brings about the fact that there are many homeless people living in the street of Los Angeles (around the globe I’d rather say), which made me think about how fortunate I am to have a house of my own and a family.
Movie Quality: 9/10

The print is presented in 1080p/AVC MPEG-4 with a 1.85:1 aspect ratio. The print looks very good throughout with some slight edge enhancement. Colors are vibrant and carry pop which brings out the fine details. The detailed scenes stand out very well. Blacks are deep. I found the print to be crystal clear with no artifacts or print damage. There is some grain throughout the print, but never becomes obtrusive. Overall, this is a fairly impressive print.
Video Quality: 9/10

The audio is presented in DTS-HD MA Lossless 5.1 mix. I was quite impressed with the depth of the dialogue coming through the center channel. Dialogue was clean and clear with no apparent issues. This film has some dynamic usage of the rears. The musical scenes sounded very good. The soundtrack was dynamic sounding throughout. You will be immersed throughout the entire presentation.
Audio Quality: 9/10

‘The Soloist’ is a very entertaining film that I actually enjoyed and was surprised. The video and audio presentation are great all around offering top notch presentation in high definition. If you are a fan of the film, this is highly recommended.
Overall Rating: 9/10