The Silence Of The Lambs Blu-ray Review 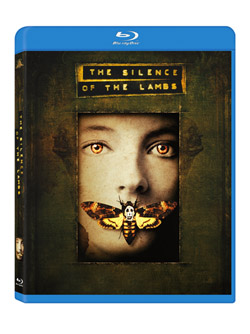 As a movie that launched many imitators from the sublime (“The X-Files,” “Se7en”) to the schlocky (“Copycat,” “The Bone Collector”), ‘The Silence of the Lambs’ could have become overdone and familiar through no fault of its own. The film spawned a sequel and a prequel, which went on to be rather successful films. Watching it again, however, you see what made it a hit. Far from a routine cat-and-mouse thriller, it is a heroine’s journey cloaked in nightmarish imagery. It’s not for the squeamish, if horrific and disturbing movie violence.

‘The Silence of the Lambs’ is a very involved tale of an FBI academy student, Clarice M. Starling (Jodie Foster), who is sent to the cell of the famed serial killer Hannibal “The Cannibal” Lecter (Anthony Hopkins), to try to convince him to fill out a questionaire. Little does Clarice realize, the head of the Behavioral Science department, Jack Crawford (John Glen), who has sent her on this errand, really has alterior motives. He has actually sent her to get help from Lecter on tracking down a mischevious serial killer, Buffalo Bill (Ted Levine), who skins his victims. Clarice meets with Lecter to find he is an evil raving genius who is always a step ahead of the game and always prying into the mind of anyone he meets. Clarice is given a lead about Buffalo Bill by Lecter and he offers more information if he can be moved to a cell with a view. Throughout the film these confrontations continue between Lecter and Starling as Starling and Crawford try to find Buffalo Bill, which turns out to be the highlight of the film. What John Demme has given us with The Silence of the Lambs is far greater then another story of a serial killer on the prowl.

More horrifying than Jonathan Demme’s imagery is the character interplay, and not always from the expected sources. Anthony Hopkins as Hannibal Lecter IS demonically attractive — like Dracula or the Joker — and Buffalo Bill IS depraved. But the film’s underlying assertion is that a bit of Buffalo Bill’s evil exists in MOST men. Witness the exchanges between Jodie Foster as Clarice Starling and Anthony Heald as Dr. Chilton. Even Scott Glenn as Jack Crawford displays some in the funeral home scene. Only Hannibal Lecter, for all his insanity, fully accepts Clarice on her own terms. No imitator has ever captured the perverse mentor-prodigy relationship between the two.

What’s most amazing about the film, however, isn’t the imagery or the performances or the attention to detail and accuracy. Most amazing is how, after ten years, an ill-advised sequel and countless imitators, “The Silence of the Lambs” still has the power, both on cerebral and visceral levels, to shock, disturb and terrify.
Movie Rating: 9.5/10

The print is presented in 1080p/MPEG-2 with a 1.85:1 aspect ratio. I have owned this film several times on VHS and DVD. Finally this film looks great on home video, yet there are issues with the print. After a 1.5 year delay, it finally makes its debut to Blu-ray. One of the problems is that the film is on a single-layer BD25 with a MPEG-2 codec which at times looks like an upconverted DVD. There are other times where up close scenes look very good when the camera is up close. Black colors are deep. Colors look much more natural than they ever have on VHS or DVD. These are the few redeeming qualities about the print. The print is not pristine as there are a few specs of dirt. The noise levels are kept at a minimum never getting intrusive. I hope that MGM will revisit this film in the near future giving it proper treatment since this film can look even better. For fans of the film you will be happy with the quality of the print.
Print Quality: 7.5/10

The audio is presented in DTS-HD MA lossless 5.1 mix. ‘The Silence of the Lambs’ is a dialogue centric film that is the main focus. For those going in expecting an intense and complex audio experience you might be a little disappointed. There are some effects that peer through the rears providing some ambiance into the soundfield. While this is not a bombastic soundtrack, it is the best that the film has sounded for home video.
Audio Quality: 7/10

All special features have been ported over from the previous 2-disc DVD edition. There are three features that are available in high definition, with one of them being the new feature “Breaking The Silence”. This is a PIP trivia track that fans of the film will enjoy.
Special Features: 7/10

I am a huge fan of the entire ‘The Silence of the Lambs’ franchise. While the Blu-ray doesn’t boast demo quality material, it does offer the best picture and audio on home video for this film. All special features have been ported over from the previous 2-disc DVD edition with one new feature in high definition. I highly recommend this film no matter which format you view it on due to the suspense and drama with some excellent acting from Anthony Hopkins and Jodie Foster.
Overall Rating: 8/10