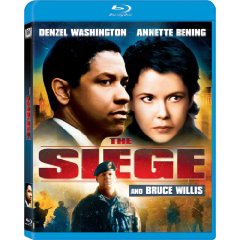 A high-profile action/exploitation thriller set in the present, The Siege is really a fantasy that extrapolates from major terrorist attacks. Denzel Washington is FBI special agent Hubbard, “Hub” to his friends, whose anti-terrorist task force must track down the terrorist cells responsible for a spate of bombings in New York. His partner is an FBI agent of Arabian extraction (played convincingly by Tony Shalhoub), proving not all Arabs are bad guys–a point the film should be lauded for making again and again. Thrown into the mix is a CIA spy (played almost kittenish at times by Annette Bening), whose ties to the terrorists appear to be at the center of the conflicts. When the bombings escalate out of control, the President institutes martial law, sending in General Devereaux (played with impenetrable countenance by Bruce Willis) with tanks and troops to ferret out the terrorists. Echoes of Japanese-Americans in internment camps ring out as Arabs, including the son of the Arab-American FBI agent, are herded into a stadium. Periodic audio-montages of “man in the street” sentiments anchor the material in the present and show how serious and relevant the material is. But finally what we have is a taut and entertaining popcorn movie, giving itself the humanistic nod when it can.

A series of terrorist attacks occur in New York City killing many innocent lives. An FBI agent, along with his Arab-American partner, go out conducting investigations to figure out who’s behind all this and other terrorist cells within New York with the help of someone from the CIA. However, the President declares martial law on New York leading a US Army General to send troops to secure the city. The General gets into the FBI’s way, hindering their investigation to find out who’s really behind all this.

The movie show some resemblance to September 11: the targets are in New York, involves Arab suicide bombers, and how America fears for the safety of its people. It’s a pretty close but it doesn’t involve planes. Denzel Washington and Tony Shalhoub play an excellent job as Agents Hubbard and Haddad as Annette Benning and Bruce Willis do a good job as the CIA agent and the general. The movie has some sort of conflicts between the FBI and the U.S. Army which show some confusing things on who’s really the authority of New York. The FBI does investigations and uses local law enforcement to stop criminals as the Army defends the country with its soldiers. There are some scenes that remind you of history, like the roundup of Arab Americans look similar to the World War II roundup of Japanese Americans. The terrorist attacks resemble how the Palestine suicide bombers attack Israelis and there’s a quick two-second scene showing some young Arab Americans throwing things at a U.S. tank, resembling young Palestinean boys protesting against Israeli troops. The movie has left some things that are based on a lot of historical events.
Movie Content: 9/10

The print is presented in 1080p/AVC MPEG-2 with a 2.35:1 aspect ratio. I was rather disappointed with this print as color management appears to have some issues. Some of that may have to do with this transfer being from the earlier days of Blu-ray as this was encoded in MPEG-2. I didn’t find the details to be that great either and probably would say they were at about above average. There is DNR and EE throughout the print which becomes very apparant in several scenes. It is transfers like this that hurts the format
Video Quality: 6/10

The audio is presented in DTS-HD MA lossless 5.1 mix. Fairing a better than the video, the audio mix has its moments where it sounds really good. Explosions sound very good bringing some ambient sounds into the soundfield. I felt like I was in the middle of the events occuring on screen. While dialogue was clean, I needed to adjust the volume due to the low audio.
Audio Quality: 8/10

The film only has 1 special feature and that is the theatrical trailer.

While ‘The Siege’ has a plot that in some ways was so unreal in 1998, 3 years later a few things with 9/11 makes this film a bit surreal to a degree. The video is disappointing, but the audio more than makes up for it. I highly recommend viewing this film, but a purchase for fans might be a bit harder considering that the extras are lacking.
Overall Rating: 7/10