“The Secret of the Magic Gourd” DVD Review

“Experience the magical story about the boundless limits of imagination and the strength we each have inside us with Disney’s heartwarming film “The Secret of the Magic Gourd”.  Based on the beloved children’s novel and featuring the voice talent of “High School Musical’s” Corbin Bleu, this wondrous fantasy is sure to delight the entire family.  It’s “a truly inspiring story that captures the wonder and awe of childhood,” raves Carey Bryson of KidsTVMovies.About.com.

When an 11-year-old discovers a mythical, magical gourd while fishing, he has no idea of the trouble that lies at the end of his hook.  With the ability to grant any and every wish, “The Magic Gourd” attempts to make all of the boy’s dreams come true, but instead succeeds in turning his world upside down.” 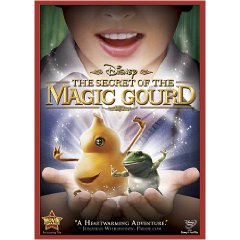 Disney is well known for having a target audience towards the younger crowd. With their latest effort ‘The Secret of the Magic Gourd’, this is a live action film for the entire family. Walt Disney Pictures, China Film Group, and Centro Entertainment all worked together to put together this wonderful collaboration. The film is based on the book that was created nearly 50 years ago.

The story of the film centers around a boy named Wang Bao who is an eleven year old with a very imaginative mind. Wang Bao is taken care of by his grandmother as his family works around the clock. He spends his days imagining and dreaming away. Bao does this during his classes in school, when he is at him, and anytime that his mind wonders off during the day. Everyone starts to believe that there is something wrong with this kid as he wants to just live in his own little world. It even gets worse for him when the kids at school begin to think that he doesn’t want to work hard in school. One day when he gets home, his grandma turns things around for him.

Bao’s grandma begins to tell his sister the story of the Magic Gourd, this starts to intrigue him. What happens next in school will change Wang Bao for a long time. He gets made fun of by the kids at school which makes him leave the school to go do his favorite hobby, fishing. He ends up catching the Magical Gourd while fishing. The Magical Gourd ends up granting Bao a wish. After his wish is granted, Bao has to keep the Gourd a secret or else there will be problems for the youngster. Bao doesn’t realize that any dreams that he has, the Magic Gourd will bring to life.

I enjoyed ‘The Secret of the Magic Gourd’ much more than I originally thought. This film is very creative and unique in the same sense. I found the story to be engaging from start to finish which was a fresh breath of air. There is a major lesson to be learned here that when you achieve a goal by yourself it is much more rewarding than cheating your way to that goal.

The film looks gorgeous on DVD with a very rich and bold color palette. It really helps when you have two animation giants from different continents together to put a film of this magnitude together. The CG looks stunning and never does it look like it was pasted on to the film making this really standout from a visual standpoint.
Movie Content: 4/5 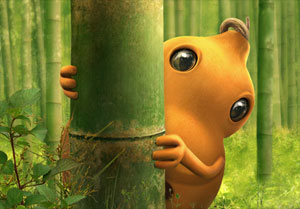 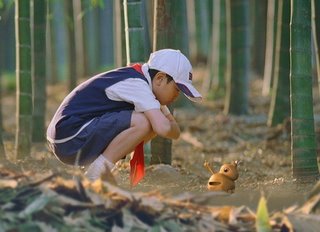 My family and I had a very good time watching this film and I would recommend it to anyone that enjoys Disney films. This one is good for the kids as it helps drive home a lesson about achieving your goals the right way and not cheating to get to the end result.
Overall Rating: 4/5 (Rental)