The Secret of NIMH Blu-ray Review 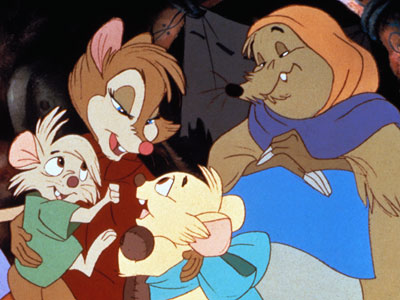 In his book, Robert C. O’Brien called his brave widow mouse “Mrs. Frisby,” but Disney escapee animator Don Bluth must have thought kids would laugh the wrong way at that. They renamed her “Mrs. Brisby” for NIMH. That acronym stands for the National Institute of Mental Health, and the rats that live near Mrs. Brisby came from NIMH–they have strange ways. But they’re the only ones who can save her house and her children, so Brisby seeks them out with the help of a humorous crow (Dom DeLuise). The magic gets laid on a little thick but this is Don Bluth’s most successful attempt to achieve a complete, sincere, animated film. It’s often forgotten, but it’s a true surprise and a rare treat in the vast wasteland of insubstantial children’s fare.

The Secret of NIMH is an astonishingly beautiful, thoughtful, and touching story about the unbreakable bond between a mother and her children. Forget for a moment that it’s about mice and rats; the premise of this movie is so human, which is why it hits so close to home and turns me into a leaky faucet every time I watch it. No animated movie even comes close to affecting me the same way that Don Bluth’s masterpiece does.

Whereas most animated films made in the last 20 years deal with exaggerated personalities, tired comic relief and unbelievable plots, NIMH concerns itself with far more realistic characters and situations that viewers can easily relate to. Mrs. Brisby is a single mother, recently widowed, with a simple home and a loving, if not challenging family – a toddler, two bickering older children, and a sickly, bedridden child. In the greater scheme of things, she considers herself just another mouse on the farm, and not particularly special or important. Her humbleness is partly why this story is so amazing. She never complains about her plight in life, never takes any credit for her actions and never gives any other character attitude. And while she is exceptionally fearful of the violent and unpredictable world outside of her comfortable home, she is determined enough to save her family that she braves certain death by visiting the Great Owl and drugging the farmer’s cat Dragon with tranquilizer.

Her courage impresses the intelligent rats of NIMH and, combined with her deceased husband’s legacy, they are moved to help her save her family from imminent doom. I am similarly moved watching this mother tirelessly fight to save her kids. What other animated movie has an even remotely similar plot? None that I can think of – and it’s precisely this human situation that makes The Secret of NIMH stand above its animated counterparts.

“Courage of the heart is very rare, the stone has a power when it’s there.” This simple rhyme is really the epitome of what the movie is all about: that love will get you through any adversity. This movie – and its message – is meant for adults just as much as children, and will remain one of the great classic animated stories of all time.
Movie Quality: 9.5/10

The print is presented in 1080p/AVC MPEG-4 with a 1:85:1 aspect ratio. The print looks better than an upconverted DVD considering that this is based off of the 2007 2 disc DVD that had received a full restoration. Colors are rich throughout, but with a very hot look to the colors. The animations do not come off as impressive as some of the previous releases. Animations do not feel fluid at times and then the background looks like a cardboard cut out at times. I am not too sure what happened here with this release, the video is lacking. There is quite a bit of digital noise present in this print that is disappointing to see with this wonderful film.
Print Quality: 6/10

The audio is presented in a DTS-HD MA lossless 2.0 mix. Like ‘All Dogs Go To Heaven’, this is yet another release with a DTS-HD 2.0 mix from MGM and while it suits the material, it just lacks a lot of that oomph. I just did not feel like the audio was mixed well for this release. It was way too soft for being a front heavy experience and even worse is that the dialogue through the center channel is almost way too soft. If anything, this is the most disappointing part of this while release on Blu-ray is the audio.
Print Quality: 5/10

It’s a very thought-provoking film that can be enjoyed by everyone of all ages. This is one of Don Bluth’s greatest works, and amidst the CGI phenomenon, this is still one of the better animated films to have been created.
Overall Rating: 5/10