Posted in DVD Reviews by George Theofanopoulos on 18 June 2009 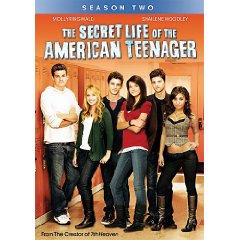 It’s a season full of bright new beginnings for The Secret Life of the American Teenager. An ABC Family series that has become a cultural phenomenon from coast to coast, The Secret Life of the American Teenager is more engaging than ever in its sensational second season. As Amy’s due date approaches, her secret marriage to Ben complicates matters even further. Viewers will be captivated by the relationship twists and turns, as they discover what the future holds for Amy, Ben, Ricky, and their friends and family. Created by Brenda Hampton (“7th Heaven”), The Secret Life of the American Teenager stars Molly Ringwald (Pretty in Pink), Shailene Woodley (“Crossing Jordan,” “The O.C.”“), Francia Raisa (Bring It On: All or Nothing ), Greg Finley (“Cold Case”), Josie Bissett (“Melrose Place”), and John Schneider (“Smallville”).

· Character Secrets: The Cast Reveals All! – The cast of The Secret Life of the American Teenager discusses the intimate details of their characters and dishes on each other in exclusive on set interviews.
· Cast Close-Ups – A special set visit reveals the likes and dislikes of each cast member in a series of one-on-one video conversations.
· “Secret Life (You And Me)” – A music video by The Strange Familiar

The drama and secrets continue in the top rated second season of the hit ABC Family original series that has fans and critics buzzing all across America. Good girl band geek Amy is smart, talented and pregnant. That’s just one of the secrets that Amy, her friends and family deal with in this poignant portrait of modern day high school life. Experience an award winning series overflowing with humor, heart and compassion.

The first season was okay. Lots of talk about teen sex, pregnancy, etc. This season, we get the same types of conversations, but it doesn’t seem as forced this time around. I and had a hard time figuring out what exactly they were going for. Was it to teach a lesson, or show everyone has problems, or give you soap opera drama? I still have yet to figure that out. As far as any parents being responsible for their lives, their children’s lives, and helping teach them responsibility and consequences they are pretty much absent yet again in this season.

Episode List:
The Secret Wedding Of The American Teenager
Baked Nevada
The Father And The Son
That’s Enough Of That
Chocolate Cake
Unforgiven
Making Up Is Hard To Do
Money For Nothing, Chicks For Free
Maybe Baby
Whoomp! (There It Is)
One Night At Band Camp
And Unto Us, A Child Is Born

If you can get past the lack of quality supporting characters I think you could enjoy The Secret Life of the American Teenager quite a bit. It was just hard for me to get past this large problem. Amy, her family and Ben were pretty much the only things that save the series from being a below average teen drama.