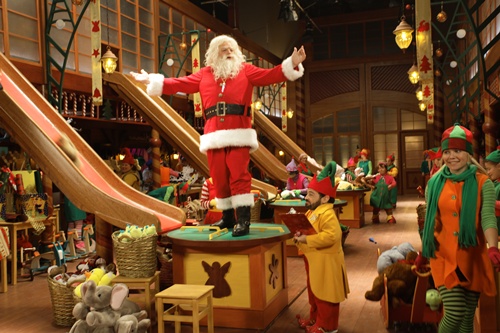 Santa gets hit by a car, mugged and almost dies, gets a job in a store and passes out in front of kids and almost dies again. Puppy turns to Stuffed Animal and gets thrown into Incinerator to burn, little girl climbs in after him, New Orphan’s parents died and is mistreated. 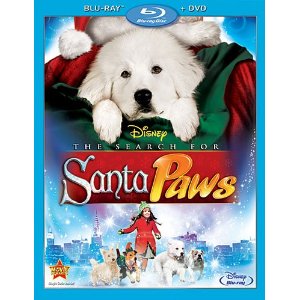 It’s been said that there are only seven basic storylines for westerns. The same might be said for Christmas movies and The Search for Santa Paws is no exception. This one leans a bit toward Miracle on 34th Street, but as Santa’s magic bag of story ideas started to run low, it clearly was time to “pay tribute” to Mister Magorium’s Wonder Emporium and about eight gallons of Annie.

The interesting thing is that, of the many entries in the “Buddies” series, including last year’s Santa Buddies, this film is less about the cute talking puppies and more about an amnesiac Santa, several adorable orphans and warm hearted yuppies.

No kidding, the little orphan girls sing a song in their room just like “You’re Never Fully Dressed Without a Smile” and the youngest orphan sings her version of “Maybe.” Actually the whole film is largely a musical with on-camera singing with both the orphans in New York and the elves at the North Pole. The songs and the lavish musical score are nice, though, and I’m looking for a soundtrack CD (last year, you had to buy Santa Buddies at Target to get a soundtrack) but can’t seem to find one this time around.

There’s even a Miss Hannigan type who burns toys, bans singing and “takes home schooling very seriously.” Okay, why did that line have to be there? Especially when countless home schooling parents might be part of the buying public. I know she’s actually lying and really making the girls work for her, but the line’s still not necessary nor nice.

What’s most interesting for holiday movie buffs is that the special effects, particularly Santa’s sleigh flying over New York, must be more rudimentary and certainly less cumbersome to create for this modestly budgeted direct-to-DVD movie than it was back when 1985’s Santa Claus the Movie used quite a bit of its multi million dollar budget on doing pretty much the same thing without the benefit of today’s technology.

Disney Channel watchers will recognize a lot of actors from various shows, including Madison Pettis (who’s grown up a bit since Cory in the House), John Ducey (the JONAS dad) and G. Hannelius (of Sonny with a Chance). Voicing the lead puppy is Mitchel Musso of Hannah Montana and Pair of Kings.
Movie Content: 7/10

The print is presented in 1080p/VC-1 with a 2.40:1 aspect ratio. Colors are vivid and bold looking. Flesh tones are natural and accurate. You can see strands of fur in the dog’s coats which provides for a sharp and detailed image. Black levels are strong. With some of the CGI used in this film, it did not look like Disney quality at all which is a shame. The moment the scenes with the CGI appear on your screen, it becomes very noticeable.
Video Quality: 8/10

The audio mix is presented in DTS HD 5.1 Master Audio lossless track. This is more of a dialogue driven film, so it does not take advantage of the soundfield. During the moments that the soundfield is used, it’s for the soundtrack and the minor effects. Dialogue is clean through the center channel with no apparent hiccups.
Audio Quality: 9/10

It’s pleasant going but isn’t likely to replace Dickens. But then, it isn’t intended to. It’s kind of like one of those store bought holiday cookie making kits. The cookies are kinda tasty, very colorful, the kids enjoy them. But they’re not the same as those cookies you waited all year for to arrive from Aunt Marge.
Overall Rating: 7/10