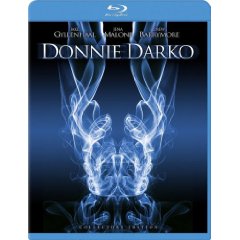 ‘Donnie Darko’ is one of those films that caught me by surprise. I had to view the film twice to get a better understanding of what was going on. ‘Donnie Darko’ is a very deep and complex film that becomes much more enjoyable with each viewing. The film had a very limited theatrical release with a $4.1 million dollar worldwide theatrical gross. This film would go on to become an even bigger cult hit once it hit the DVD format.

The Blu-ray offers ‘Donnie Darko: The Director’s Cut’ takes the audience down the rabbit hole on a long, strange trip that alternately becomes, surreal, comic, dramatic and just plain scary. Donnie (Jake Gyllenhaal) suffers from hallucinations and takes medication to help control his “visions”. One night after taking his medication he has an encounter with a large, rancid, evil looking six foot tall rabbit who informs him that the world is going to end. “Frank” (as he calls his imaginary friend) takes him briefly into the future disappearing and reappearing throughout the film. Evidently only Donnie can stop it.

The film moves from fantasy to reality with no clear indication as to whether or not Donnie’s “visions” are real or if everything is in his imagination. Using a soundtrack made up of 80’s staples (“Love Will Tear Us Apart” by Joy Division, “Head Over Heels” by Tears For Fears, “Never Tear Us Apart” by INXS among many other titles), director/writer Richard Kelly creates a bizarre satire of suburbia and surreal science fiction drama. Kelly’s original version of the film featured some different songs and was shorter (and features new sequences and optical effects not in the 2001 release) but also seemed more open to interpretation. The allegorical references sprinkled throughout the film along with the bizarre dream sequences made the original film both fascinating and plain weird.
Movie Content: 4/5

The print is presented in 1080p/AVC MPEG-4 with a 2.35:1 aspect ratio. This is a film that will never look crystal clear no matter what enhancement is done to the image. Otherwise, FOX has done a great job with this film on Blu-ray. Colors are muted providing a gauzy look with softer looking blacks. The image has a muddy look. Any flaws or issues that one may think that this print provides are not an issue, but more as to how the film was originally produced. This is a darker film that retains this aspect throughout the film. Fans will be happy with the image transfer as it does a great job in providing the best video transfer of the film yet.
Print Quality: 3.5/5

The audio is presented in DTS-HD MA lossless 5.1 mix. ‘Donnie Darko’ is a dialogue centric film that is the main focus. For those going in expecting an intense and complex audio experience you might be a little disappointed. There are special effects and the soundtrack peer through the rears providing some panning effects. It is done so well that you feel as a part of the experience. While this is not a bombastic soundtrack, it is well executed. I did have a few issues with the dialogue being soft in a few spots, but overall it is well done.

All the special features from the previous DVD releases have been ported over, which will please fans.
Special Features: 4/5

You can witness both Kelly’s theatrical and director’s cut in high definition. The meaning of Kelly’s film is still, ultimately, open to debate and while the film may be a bit less ambiguous than the first theatrical cut, its also got its fair share of great moments as well. I highly recommend this as a rental for newcomers and a purchase for fans.
Overall Rating: 4/5