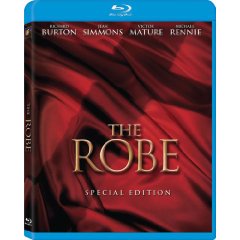 This epic film was directed by Henry Koster, a German who also is known by the name Herman Kosterlitz. His works include A man called Peter (1955), Harvey (1950), and The bishop’s Wife (1947). I believe that major premise that Koster was portraying to the public was that faith in Christ is worth both searching and dying for. The Robe is based on a fiction novel by Lloyd C. Douglas. The story is full of life’s major issues that most of us have to work through jealousy, anger, betrayal, forgiveness, reconciliation, and the progression of and test of personal faith.

While titled the Robe, the story really evolves around Marcellus (Richard Burton) a tribune in the service of Rome. He was ordered to crucify Jesus. He wins the robe while gambling at the foot of the cross, but when he touches it he becomes tortured in his mind. When overcome, he cries out “Where you there.?” Ironically the best that anyone can do for him is to send him on a quest to find the robe and destroy it, thinking that will bring his mind to rights. When he finds the Robe he finds peace of mind, through reconciliation to God through belief in the Christ who wore the Robe. Instead of destroying the Robe he instead joins the Christians in declaring God’s love for humankind. The ending of the movie is magnificent! When brought to trial by Caligula (Jay Robinson) Marcellus is ordered to pledge allegiance to Rome and renounce his faith in Christ on the penalty of death. He does renew his pledge to Rome but refuses to renounce his faith in Christ. He is sentenced to death for his faith.

The beginning of this story starts before Marcellus has to crucify Jesus, yet the cross, signified by the Robe itself is central to the story. Without it there would be no new life and faith in Christ to die for. Some have called it another story of the Crucifixion, yet I would say no. It is the continuation of the reality of the meaning of the crucifixion… i.e. the Love of God for humankind.
Movie Content: 8/10

The print is presented in 1080p/AVC MPEG-4 with a 2.35:1 aspect ratio. I get the privilege this week to review yet another classic film that has received a beautiful restoration. With the first film being ‘South Pacific’ which also received a fantastic restoration. Twentieth Century Fox’s pre-production of The Robe was halted so that the film could be changed to a CinemaScope production. Lowry Digital took special care of this restoration providing fans such a technical feat never thought possible. The image offers an impressive color palette provide that earlier technicolor films had a muted look to them. Details are excellent with scenes that are upclose and as the camera pans away there is a loss of details. This print is clean and pristine with no visible print damage.
Print Quality: 9/10

The audio is presented in DTS-HD MA lossless 5.1 mix. While ‘The Robe’ will not go down as demo material, Lowry Digital has dome a fantastic job bringing the original four channel mix to life. What made ‘The Robe’ even more astonishing at the time is that the film also allowed for panning effects. This allowed to give the fil an even better atmosphere. Dialogue presented through the center channel so ever nice and clear.
Audio Quality: 9/10

It is a nice effort by Fox to offer this 50th Anniversary edition on Blu-ray which will make fans very happy. I had never seen ‘The Robe’ until this release on Blu-ray and I am impressed all around by this package. Lowry Digital has done a wonderful at restoring this classic film. I highly recommend ‘The Robe’ for fans and those that are curious, give this a rental.
Overall Rating: 9/10

« Lost: “He’s Our You” Review
The Princess Bride Blu-ray Review »