Juliet (Academy Award-winner Hilary Swank, Million Dollar Baby), a beautiful doctor, has found the perfect New York apartment to start a new life after separating from her husband. It’s got spacious rooms, a spectacular view, and a handy, handsome landlord. But there are secrets behind every wall and terror in every room as Juliet gets the unnerving feeling that she is not alone. She is being watched. She is being stalked. And no one is safe when she discovers the relentless horror on her doorstep. But how do you stop an evil that you can’t see…until it’s too late? Jeffrey Dean Morgan (Grey’s Anatomy) and screen legend Christopher Lee (The Lord of the Rings) costar in this pulse-pounding shocker from famed horror studio Hammer Films (Let Me In). 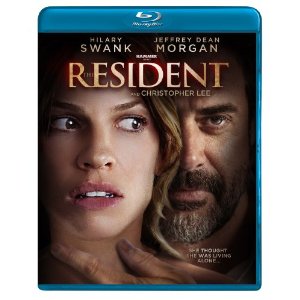 When it came to The Resident, I thought this seemed like two movies trying to start up at once. The first seemed to have a distrust theme playing, with a little bit of naivity thrown in for kicks. Swank tries to come across as a woman who is marred by a bad relationship, seems people stalking her in the flashbeams of every passing figure, and still trusts enough to overlook a lot of things. Unlocked doors, sounds, open windows; all those things are golden.
Just as long as you drink a lot – and she does.

The second movie is more of a pure stalker film, showing you exactly who and what your problem is. You KNOW who the problem is after a specific event and you are pretty sure that madness is a theme. This happens early – too early – so you have to ride on the knowledge that this will stays terrifying. You see the danger in everything that happens to do with the apratment that Swank rents, too, even though she does not. It is overdone. You have to believe that firehazards are not that bad, that a ER doctor cannot afford rent, and that drinking three glases of wine a night and passing out everyday is not a sign (to a doctor) that she might have a problem. Some things just have to go a bit too far and fall into the unbeliveable.

As far as the acting goes, Morgan was great in places. He is charging and yet cruel and he is strange and he is odd. I liked that and i liked the way he was portrayed, making a character that would not be sound somewhat detached and a lot-a-bit mad. I wonder what he would have been like if they let him truly act, trying out this person without the script-lease in tow. Swank is less on that scale, trying too much. Added in is the oddity in the romance and the chemical attraction you have to wonder about, not to mention some badly-timed whimpering. She seems to find a relationship woe as bad as violation on a MASSIVE scale. Worse still, she does not notice someone coming into her home for weeks. No footprints, nothing out-of-place; I would hope this is not a world people truly haunt. And Lee; he’s great here and every likeable as the oddly eclectic (and seemingly cruel) father-figure. I liked him here and he helped the movie, although the role was somewhat shallow for someone so good.

The print is presented in 1080p/AVC MPEG-4 with a 1:33:1 aspect ratio. I found the print to be good for a low budget film, but there were some issues that had me wondering with the original director’s intent. Colors are on the soft side, some of that has to do with the lighting of the film. Which tends to affect fleshtones as they do not look accurate. While blacks are strong, they also caused a few issues. Details are excellent with nice amounts of clarity. The image is pristine with no apparent issues such as dirt or specs.
Print Quality: 9/10

The audio is presented in a DTS-HD MA lossless 5.1 mix. This is not an audio mix that you will go in expecting huge things from the soundfield as it is primarily a dialogue driven film. The dialogue is clean and clear through the center channel with no apparent issues. I was rather happy with the way the film sounded considering that this was more of a dialogue centric film.
Print Quality: 9/10

Without Hilary Swank this movie would have been a straight to video disaster. With her it gives the movie a legitimate feel and deserved a wider release then it got. This was not a great movie, but it is certainly well worth watching.
Overall Rating: 6/10