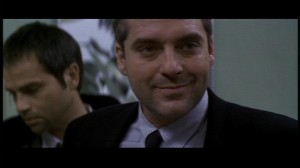 A monster runs amok in a Chicago museum on the very day the institution is holding a glitzy reception. Naturally, the museum bosses want to go ahead with their public relations even as the creature is decapitating victims. Penelope Ann Miller plays a scientist on the run from the critter (which is at times computer generated and reminiscent of the raptors in Jurassic Park), and Tom Sizemore is a cop looking for his cold-blooded (in every sense) killer. Peter Hyams (Timecop) directs, and as always he excels at managing the plastic action at the cost of real feeling and logic.

The Relic seems to be one of those love-it-or-hate-it movies about which I always seem to be sitting on the fence. It’s a frustrating treat for the eyes of horror, but one hopes for a little bit more.

Penelope Anne Miller stars as Dr. Margo Green, an evolutionary biologist at the Chicago Natural History Museum (no such thing, I imagine; this was filmed at the Field Museum), and Tom Sizemore is here too as a cop investigating some deaths there and outside the museum, nasty deaths, too. I think Hyams does a great job setting up a doom-choked mood; acting as his own cinematographer, he gives the film a dark and dusty look which is appropriate to being set in a museum. I’d have preferred a little more light so that we could see a little more of the museum and what makes it such a wonderfully creepy setting for a horror film, but still, it works, and besides, seeing this on VHS, maybe I should be giving this movie the benefit of the doubt when things are, I trust, a little clearer on DVD. Unfortunately he’s got this incredibly annoying habit of framing close-ups way too close. I don’t know if the version on video is pan-n-scanned or simply unmated, so I don’t know if it would have looked better, or worse, on the big screen. But these close-ups happen a lot and are a bit annoying.

Stan Winston’s creature, the Kothoga, is just great. At the time of this film’s release, he said frequently that this was the best creature he’d yet created. It’s kind of hard to describe, like a cross between a lion and a beetle, but it’s big, it’s nasty, and it’s exceptionally well realized with animatronics and CGI (unusually good CGI for a creature that’s hairy; hairy animals are much more difficult to create with computers than scaly ones). This movie’s almost worth a rental just for one incredible shot of the Kothoga chasing down one unlucky guy, grabbing him, and ripping off his head, all in one flawless shot.

Sad to say, the story surrounding this monster is ordinary, courtesy of four screenwriters. The central problem with the story is the character of Dr. Green, who has to be one of the most irritating big-screen heroines I’ve seen in my lifetime. The story itself, problem has no great shakes other, with the obligatory False Scare By Cat happening no more than ten minutes in, followed up later on by a False Scare By Cleaning Lady. There’s a lot going for this movie, but it needed a lot more work in the creative department before being shot, not to mention Hyams needing a good, stern lecture about his use of close-ups.
Movie Content: 6/10

The print is presented in 1080p/MPEG-4 with a 2.35:1 aspect ratio. I almost feel like the upconverted DVD was transferred to Blu-ray with no real upgrade. Colors are very muddy looking with the apparent use of edge enhancement hurting this print even more. The sense of details appear to be lost and even worse is with the backgrounds not looking that great at all. They look as if they were slapped on as an afterthought.
Video Quality: 7/10

The audio is presented in DTS-HD MA lossless 5.1 mix. The video department isn’t too hot for this film, but the audio does help redeem this package. While the audio isn’t the greatest that I have heard on Blu-ray, it helps salvage the disc a bit when compared to subpar video. I was disappointed that the dialogue portion of the mix was on the lighter side which I had to adjust my volume a few times throughout the film. With raising the volume to hear the audio also brings then the issue with having a film’s action sequences sound bombastic. I hate when this happens in several films that I have reviewed. The moments where this track did work was with the skydiving sequences where I felt immersion and a part of the atmosphere.
Audio Quality: 8/10

Overall if you haven’t seen this then I would recommend this to monster-movie enthusiasts, but most others won’t get a lot out of this one.
Overall Rating: 6/10