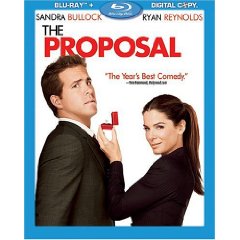 Margaret Tate (Sandra Bullock) terrorizes her publishing house co-workers with her abrasive, take-no-prisoners management style, especially her overworked assistant Andrew Paxton (Ryan Reynolds). But when Margaret is threatened with deportation to her native Canada because of an immigration technicality, the quick-thinking exec announces that she and Andrew are engaged to be married. Ambitious Andrew agrees to go along with her scheme—if there’s a long-awaited promotion in it for him. Everything is going according to Margaret’s plan, until an overzealous immigration official makes it his business to prove that the couple’s engagement is bogus. To demonstrate her commitment to her new fiancé, Margaret agrees to celebrate the 90th birthday of his colorful grandmother (Betty White) — in Alaska. The editrix’s type-A ways put her at odds with her eccentric future in-laws with hilarious consequences, until the Paxtons teach Margaret a thing or two about family.

A tough lady-boss (Bullock) is being deported to Canada for willful non-compliance with the US immigration department. To save herself, she directs her doormat of an assistant (Reynolds) to marry her. He reluctantly agrees to play along, after she “helps” him understand the virtues of being employed. If you think you know where this story is going… well, you are right. The “happily ever after” cannot be avoided. ‘Tis a comedy after all…What is fresh is how skillfully the writers and the director allow the story to veer away from the “happily ever after” course, keeping us on the edge of our seats until the satisfying end, which we have known all along was bound to arrive.

The chemistry between both Bullock and Reynolds is another pleasant surprise. I like both Bullock and Reynolds as they have show some strong performances over the years. The roles here suit the pair’s natural acting styles reasonably well, which in turn further enhances the believability of their characters. The look of constipated doom on Reynold’s face, as he’s being informed he’s engaged, is hilarious. Bullock has always been that nice girl next door persona in her films and she does not play the mean boss like you would hope; the intended tough as nails character against her overly compliant secretary is lost at times. That is ok when both work so well together in this film.
Movie Quality: 9/10

The print is presented in 1080p/AVC MPEG-4 with a 2.35:1 aspect ratio. I found this print to be rather eye pleasing with vibrant colors. Fleshtones are very natural and accurate, considering that we see a few bare necessities throughout. Black levels are solid throughout. The image was also sharp with excellent details. The image is clean and pristine making this a very nice looking image.
Video Quality: 9.5/10

The audio is presented in DTS-HD MA lossless 5.1 mix. his film is a dialogue driven film. Dialogue was clean through the center channel with a nice degree of depth. I never had to raise or lower the volume to make out what was being said. The soundfield does get a few effects into play, but nothing major. The soundtrack takes advantage of the soundfield with audio also lightly pouring through the rears. I found this to be more of a front heavy experience due to the type of film.
Audio Quality: 9/10

I found ‘The Proposal’ to be a cute and entertaining film especially with the great on screen chemistry from Ryan Reynolds and Sandra Bullock. On Blu-ray the film has excellent video and audio which will not disappoint fans. This is one of the better romantic comedies to come along in a very longtime.
Overall Rating: 8.5/10