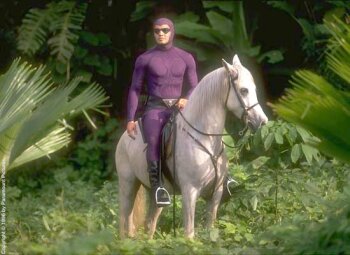 The story begins as an expedition lands on the island of Bengalla, seeking the legendary skulls of Touganda. Believed to harness an energy force of immeasurable power, the skulls could spell disaster for mankind. And that’s exactly what ruthless tycoon Xander Drax (Treat Williams) has in mind unless one man can stop him. Now evil has met its match and great movie adventure has a new name – THE PHANTOM!

An old-fashioned adventure  is the best description of this modern-day comic book-hero-come to life-story. This is almost like one of those early Tim Burton directed-Batman type adventures without all the darkness. The language is mild, the special-effects are decent and the sound is good. Best of all is the scenery, some beautiful landscapes filmed in Thailand and Australia. Instead of the city being where our comic book hero performs his heroics, this is out in the jungle, more like an Indiana Jones-type story. It’s fast-moving, it’s hokey, it’s unrealistic but its generally fun to watch. Even the villain (“Xander Drax” played by Treat Williams) isn’t really all nasty. “The Phantom” (Billy Zane) has the normal off-and-on corny romance situation with feminist-journalist “Diana Palmer” (Kristy Swanson) and the film gives you an entertaining 100 minutes. It’s no award-winner but at least it’s something you watch with your kids.
Movie Content: 7/10

The print is presented in 1080p/AVC MPEG-4 with a 1.85:1 aspect ratio. For a film that was rather gritty presentation on DVD, has been cleaned up rather nicely on Blu-ray. Colors are strong with reds and greens taking center stage as we do spend a lot of time outside in the forest. Fleshtones are natural looking. Blacks also have an inky look to them during the daytime scenes, but there were darker looking scenes that took a hit. Details are very well done considering how out of focus this film looked on DVD. There is some slight grain throughout the film, which isn’t distracting at all. Video Quality: 9/10

The audio is presented in DTS-HD MA lossless 7.1 mix. I was surprised as to how bombastic this mix was in the soundfield that it really made me impressed what can be done if a film is given the proper care. I wish that the initial release had received this kind of care as we wouldn’t be waiting for a better version so ever patiently. There are a lot more dynamic effects in the rear speakers now. Bass management is about right giving that extra needed oomph to gun shots and explosions. The action is way over the top in this film, and this mix does a job well done immersing the viewer.
Audio Quality: 9/5

‘The Phantom’ is an entertaining film that you can enjoy with the whole family. If you are a fan of this film and own the DVD, you would owe it to yourself to upgrade due to the excellent video and audio presentation. If I have one complaint again with this latest batch of Lionsgate releases, we only get a theatrical trailer.
Overall Rating: 7/10