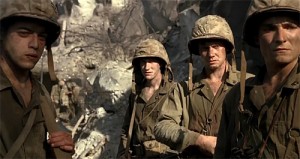 The Pacific is an epic 10-part miniseries that delivers a realistic portrait of WWII’s Pacific Theatre as seen through the intertwined odysseys of three U.S. Marines – Robert Leckie, John Basilone and Eugene Sledge. The extraordinary experiences of these men and their fellow Marines take them from the first clash with the Japanese in the haunted jungles of Guadalcanal, through the impenetrable rain firests of Cape Gloucester, across the blasted coral strongholds of Peleliu, up the black sand terraces of Iwo Jima, through the killing fields of Okinawa, to the triumphant, yet uneasy, return home after V-J Day. The viewer will be immersed in combat through the intimate perspective of this diverse, relatable group of men pushed to the limit in battle both physically and psychologically against a relentless enemy unlike any encountered before.

The superb HBO Miniseries “The Pacific” is another remarkable collaborative production effort by Steven Spielberg and Tom Hanks. It follows the US Marine Corps through the horrific World War II Pacific battles of Guadalcanal, Cape Gloucester, Peleliu, Iwo Jima, and Okinawa. Short interludes in Melbourne, Australia; Paris Island; and some stateside hometowns provide a jarring counterpoint to the battle scenes.

Comparisons with “Band of Brothers” are perhaps inevitable. “Band of Brothers” had the advantage of following a single unit through the war, and was derived primarily from Stephen Ambrose’s superb book of the same name. The narrative thread of “The Pacific” is the experience of three individual Marines whose lives are reasonably well documented. However, their stories overlap minimally, and the ensemble feel and continuity of “Band of Brothers” is lacking. Perhaps in compensation, “The Pacific” is a gritty, violent, and painfully graphic presentation of what it was like to be a Marine in the Pacific war.

The three Marines featured in the miniseries are meant to be broadly representative of the Corps. John Basilone is a pre-war Marine who wins the Medal of Honor at Guadalcanal, and is sent home to sell war bonds. He will fight to return to duty, first as a trainer of new Marines, then as a leader of troops at Iwo Jima. Robert Leckie joined up after Pearl Harbor and survived the fighting on Guadalcanal before being sent home for wounds suffered at Peleliu. Eugene Sledge joined up a little later, held out by a medical condition, and would serve “With the Old Breed” at Peleliu and Okinawa, as his autobiography puts it. He carries the narrative to the end of the war, in the mud and carnage of an Okinawan battlefield populated by large numbers of civilians as well as combatants. A final episode captures the efforts of the survivors to reintegrate back into civilian life.

Each episode of “The Pacific” opens with a few remarks by surviving veterans and a voice-over narrative by Tom Hanks that connects the episodes. Every effort appears to have been made to show authentic uniforms, weapons, and equipment. The individual episodes run less than an hour, but they pack an emotional punch that should be plenty for all but the most hardened viewers. “The Pacific” is highly recommended to those viewers who found “Band of Brothers” to be a worthwhile experience.
Movie Content: 10/10

The print is presented in 1080p/AVC MPEG-4 with a 1.78:1 aspect ratio. “The Pacific” encompasses the gritty atmosphere in content as it does on print. This is one area that some might feel like they are snubbed by the print, but this is how the film was intended to look. I found colors to be strong throughout the entire presentation. Blacks are deep. Fleshtones have a natural look and feel to them. Details are excellent, but there were scenes where a loss of details occurred. It is things like this that could turn off anyone looking for a pristine print. It just adds to the director’s intent to make this a very atmospheric presentation giving the film a documentary look and feel.
Video Quality: 9/10

The audio mix is presented in DTS HD 5.1 Master Audio lossless track. This is a mini-series that is mixed between battle and dialogue driven scenes. This is an overly aggressive sound mix. Dialogue is centered properly through the center channel providing a nice deep clarity. During dialogue driven films, this is very important on the depth as I have seen with a few DTS-HD mixes lacking dialogue depth. There are some excellent dynamics during the battle sequences which make you feel like you’re in the middle of the gunfire and explosions. Bullets will whiz by in the rears providing nice panning effects. Bass is just right providing the appropriate amount of bang when an explosion occurs. In no way will you be disappointed with the audio from this mini-series.
Audio Quality: 9.5/10

I highly recommend this series to those who want to see something great. Its not often we get a long historical series like this and to have one this well done is a treat.
Overall Rating: 9/10