The One Special Edition Blu-ray Review 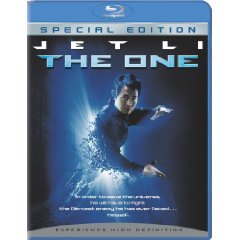 The One sets a martial arts milestone by pitting action star Jet Li against his greatest enemy: himself. This sci-fi thriller establishes a “multiverse” consisting of countless parallel universes, each populated by variants of every individual. Li plays a renegade from the Multiverse Agency, illegally traveling through “quantum tunnels” to eliminate all versions of himself until only two remain, each sharing the cumulative strength of their “parallel universe versions.” This mumbo-jumbo inspires a variety of dazzling special effects, and director James Wong (with cowriter and fellow X-Files alumnus Glen Morgan) injects clever humor into the Matrix-derivative premise. Carla Gugino is wasted as the “good” Li’s obligatory love interest, but The One will appeal to action fans with its fast-paced pursuit between the evil Li and two agents (Delroy Lindo, Jason Statham) assigned to stop his trans-universal killing spree. It’s a one-gimmick movie, best enjoyed with your brain in neutral.

Even the film’s countless scenes of joyless, uninspired action are also to blame. Director Wong seems to have a “Matrix” fetish; if the abundance of bullet-dodging sequences, in which a character quickly ducks out of harm’s way while the camera trails with the bullet itself, isn’t proof of Hollywood’s lack of originality, then nothing ever will be. The martial arts fight sequences will no doubt draw comparison to films like “Crouching Tiger, Hidden Dragon,” but, despite their well-staged appearance, they lack any sort of energy or intensity. Oh, and did I mention the big payoff sequence, a finale with sparks and slow-motion photography that will surely remind younger viewers of the final showdown from Disney’s “The Lion King?”

The film’s biggest problem is Jet Li himself, who plays a plethora of characters, but can’t manage a single worthy performance as any of them. His arrogance and wit in the role of Yulaw are unaffecting and run-of-the-mill, and he seems more focused on those two traits than he does in making this antagonist into a fearsome figure. Since Gabe is little more than a pawn in Yulaw’s game of chess, the story gives us little reason to care whether or not he lives or dies. In fact, by film’s end, you may find yourself pleading with the writers to just kill them both and end it all.
Movie Rating: 5/10 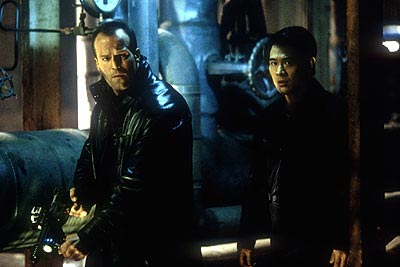 The print is presented in 1080p/AVC MPEG-4 with a 2.35:1 aspect ratio. Color management is excellent with the style that is being used in the film. Colors are bold, vibrant, and pop off the screen. Black levels are rather deep. This is one detailed film due to strong color management and deep blacks. There are no blemishes on this print at all. This is a darker film which tends to still stand out very well due to some excellent lighting.
Print Quality: 8/10

The audio is presented in Dolby TrueHD 5.1 mix. Sony engineers have done another great job here with the audio presentation. The audio takes advantage of the soundfield with the rears getting a good amount of usage. Special effects such as guns blazing sound very good. Dialogue is clean and clear through the center channel. This is a well balanced mix with no issues of having to raise or lower the volume.
Audio Quality: 8.5/10 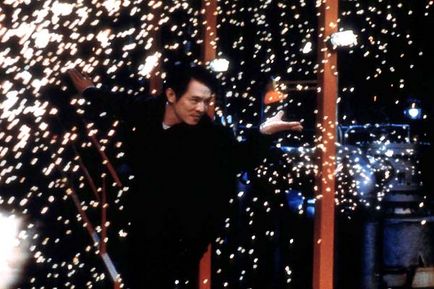 All special features are available in standard definition.

I am a big Jet Li fan but I have to say that this film was terrible. It is also not very often that I say that about a film. There was not one bit of originality in the whole film. If you haven’t already seen it, think of Highlander and Sliders, throw in a few Matrix style effects, mix them all together and ‘The One’ is what you end up with. The film is something that I can only recommend to Jet Li fans or those looking for a night of action where a film doesn’t take itself seriously.
Overall Rating: 8/10