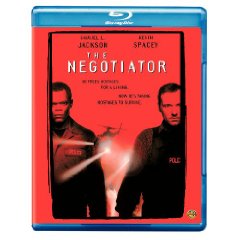 Although it eventually runs out of smart ideas and resorts to a typically explosive finale, this above-average thriller rises above its formulaic limitations on the strength of powerful performances by Samuel L. Jackson and Kevin Spacey. Both play Chicago police negotiators with hotshot reputations, but when Jackson’s character finds himself falsely accused of embezzling funds from a police pension fund, he’s so thoroughly framed that he must take extreme measures to prove his innocence. He takes hostages in police headquarters to buy time and plan his strategy, demanding that Spacey be brought in to mediate with him as an army of cops threatens to attack, and a media circus ensues. Both negotiators know how to get into the other man’s thoughts, and this intellectual showdown allows both Spacey and Jackson to ignite the screen with a burst of volatile intensity. Director F. Gary Gray is disadvantaged by an otherwise predictable screenplay, but he has a knack for building suspense and is generous to a fine supporting cast, including Paul Giamatti as one of Jackson’s high-strung hostages, and the late J.T. Walsh in what would sadly be his final big-screen role. The movie should have trusted its compelling characters a little more, probing their psyches more intensely to give the suspense a deeper dramatic foundation, but it’s good enough to give two great actors a chance to strut their stuff.

Lt. Danny Roman (Samuel L. Jackson), a police negotiator, and his partner Nate Roenick (Paul Guilfoyle) discover that someone has been embezzling money from the police retirement fund. When Nate is killed, Danny is set up with planted evidence to take the fall on the embezzlement charges.

When Danny confronts Inspector Terence Neibaum (J.T. Walsh), who works in Internal Affairs, trying to find out why he is being set up, things get out of hand and Danny winds out taking Neibaum and his entire office hostage. Danny insists on speaking only with Lt. Chris Sabian (Kevin Spacey), a police negotiator from a west side precinct who is unknown to their department. Danny’s hopes are that with Chris being an outsider, he can help him discover the truth behind the bad cops in his department that killed his partner.

What follows is a tense thriller as step by step, Danny gets closer to the truth behind the very people he has known and worked with for over ten years, building up to a rather predictable and yet intensely climactic ending. The performances by Samuel Jackson and Kevin Spacey are as good as it gets, backed by terrific supporting roles from David Morse, J.T. Walsh, Siobhan Fallon, Paul Giamatti, and Michael Cudlitz.

The Negotiator stands out amongst other movies of it’s genre because of it’s tight scripting, excellent editing and photography, and the obvious fact that the actors involved were working as a close team. This is a great thriller, tense from beginning to end.
Movie Quality: 9/10

The print is presented in 1080p/VC-1 with a 2.40:1 aspect ratio. This is a nice transfer for a catalog title considering that just merely a few months ago we were still getting average transfers. Towards mid to late summer a few things started changing with the quality of catalog releases. With the film only being 11 years old, we get an impressive transfer. Colors are strong, but hold a softer look to them throughout the entire presentation. The color palette really shines here though as reds and browns really stick out. Blacks are deep.  Grain is present accept it is on the lighter side which never becomes obtrusive. This is a good enough transfer to ditch your DVD.
Video Quality: 8.5/10

The audio is presented in DTS-HD MA lossless 5.1 mix. This is a very underwhelming audio mix that has issues with the dialogue being drowned out. There wasn’t enough activity in the surrounds as this is more of a front heavy experience. My problem here is that the entire presentation is too bombastic in the front which just doesn’t sit right with me for a film of this nature. It’s better than the DVD, but I was disappointed that this was not better.
Audio Quality: 6/10

‘The Negotiator’ is a very good movie that you will enjoy from start to finish. My only complaint is that the film was a little too long for its own good if I could doc from the score. The print quality is actually fairly good, but the audio leaves a bit too be desired as I expected much more. Fans of the film this is a nice upgrade over the DVD.
Overall Rating: 7/10